The Relation of Anatomy and Physiology of Ear

Sense of hearing is accomplished with the help of the ear. It is classified into three different sections which are “the external/outer ear, the middle ear, and the internal/ inner ear”. The external ear comprises of “pinna, external auditory canal, and the ear drum”. The eardrum is the other name used for the tympanic membrane. When the sound waves travel through the external ear, they enter the middle part of ear through the eardrum. The role of the outer ear is to gather the sound waves and amplify them. These amplified sound waves are directed to the middle ear through the eardrum. The middle ear comprises of “tympanic cavity, pharyngotympanic tube, and ossicles”. The tympanic cavity is attached to the eardrum. The ossicles are the three small bones which are present in the tympanic cavity. The ossicles transmit the sound waves of the eardrum in the form of vibratory motions to the inner ear. The middle ear acts as a protective barrier of the internal ear from high-frequency damaging sound waves. The sound waves are turned into vibrations within the cochlea. The inner part of ear is also called a “bony labyrinth (positioned in temporal bone)”. The inner ear consists of “the cochlea, the vestibule, and the semicircular canals”. The cochlea is filled with perilymph (plasma fluid). It also has a membranous labyrinth which also has thick fluid called endolymph. These sound vibrations are turned into nerve impulses in the cochlea. These electric/ nerve impulses reach the brain (cerebral cortex) where these nerve impulses are interpreted. 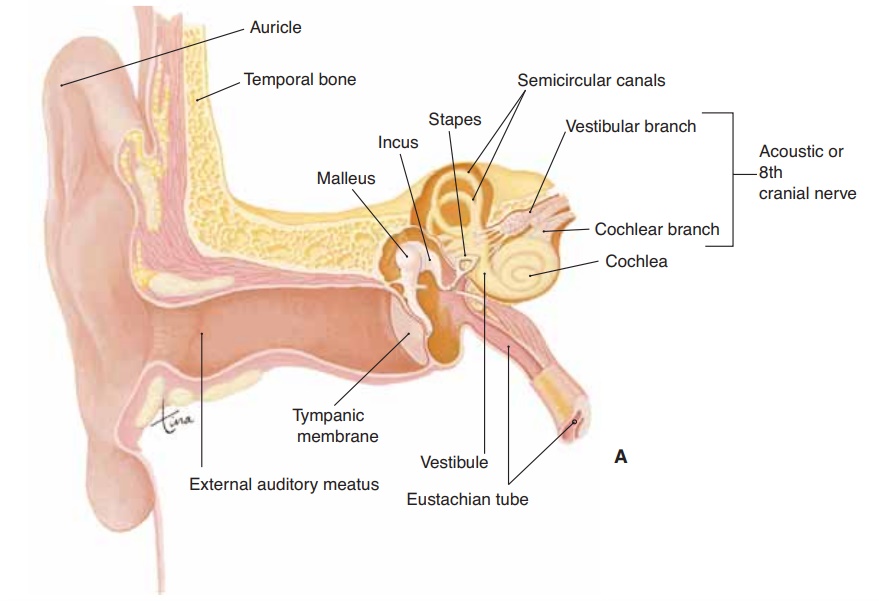 (The Ear: Anatomy and Physiology, n.d.)

Transduction of Signals in Ear

Transduction of Signals in Somatic Peripheral Sensory Nerve and Hearing

There are different process and functionality of the transduction of signals taking place in somatic peripheral nervous system and sense of audition. The Somatic Peripheral Nervous system has the control of the voluntary actions (intentionally influence) in the body through the skeletal muscles. The “Somatic Peripheral sensory nerve transmits signals from the CNS (central nervous system) to skeletal muscles” (Akinrodoye & Lui, 2021). The transduction takes place with the help of sensory and motor neurons. The process starts with the receptors of the external stimuli of vision, hearing, touch, and smell. On the other hand, the process of hearing consists of nerve impulses that are converted from the sound waves/ vibrations in the cochlea. These nerve/electric impulses are directed to the brain for the completion of the process of hearing.

If a sharp or high-frequency sound is heard, it can cause frightening to the person. When the person is frightened or scared by the loud and abrupt sounds, it can activate the autonomic nervous system causing tension, sweating, shivering, or involuntary muscle movement. The inner ear is the most important part in the process of hearing. Homeostatic imbalance in the fluids of the cochlea can cause various physiological complexities such as deafness and hearing disorders. If the ear is exposed to high-frequency sound waves or homeostatic fluid imbalance, it can cause permanent deafness and hearing loss. (Juhn et al., 1991)

In a nutshell, the sense of hearing or audition plays the main role in accomplishing communication. The sense of hearing is deeply rooted in social living that requires effective means of communication. The ear is the main organ that transforms the sound vibrations/ waves into nerve/ electric impulses through the process of hearing. Any damage or fluid imbalance in any part of the middle or inner ear can cause temporary or permanent hearing loss.

The Ear: Anatomy and Physiology. (n.d.). Retrieved December 4, 2021, from https://www.brainkart.com/article/The-Ear–Anatomy-and-Physiology_18725/

Introduction The hands are used to perform all the manual tasks in our daily lives so understanding the muscles of the hands and the way these muscles perform is very important. Extrinsic and intrinsic muscles are the two categories of …

Abstract Cardiac attacks and cardiomyocytes damage are prevailing in society and mainly affect the adult population. It also vigorously causes diabetes and obesity with reduced oxygen intake, accumulation of fat over the heart, stiffness of vessels, and abrupt blood pressure. …