In statistical analysis, hypothesis testing is an essential factor. The primary purpose of a statistical study is to help us perform hypothesis testing. A hypothesis can be described merely as an educated guess about a specific process. Its validity is always tested either through observations or experiments, and then own conclusions are made about the hypothesis to determine whether it’s true or false. One basic function of a hypothesis is to check the validity of an independent variable against a dependent variable through the use of hypothesis statements. An example of a hypothesis statement would be, ‘If the teacher gives students a math test in the morning rather than in the afternoon, the student test scores will improve.’ In this example, the independent variable is offering students exams in the morning rather than in the afternoon, while the dependent variable is the student scores. When using statistical methods required data is collected, after that statistical operation done on the received data to come up with sound conclusions. The conclusions determine whether the stated hypothesis should be accepted or rejected. The paper shall discuss some of the key methods in statistical analysis, and they are; the confidence intervals and p-values (Altman et al. 153).

P-value approach helps researchers to determine the likeliness of an event occurring, that is, the p-value is useful in determining if the hypothesis statement holds or not. This is made possible through the use of the concept known as a null hypothesis. The concept works by first assuming that the null hypothesis is true, then statistical experiments and operations are undertaken to decide whether it’s true or false.

A small P-values indicates unlikeliness, while a large P-value supports the null hypothesis. Usually, the size of a P-value is measured using a statistic denoted as α (Alpha). If P < α, this means that there is a situation of unlikeliness, and if P > α there is a high probability that the null hypothesis is true (Vickers 55). The following are the main steps in determining hypothesis using the p-value approach:

The table below shows a summary of the relationship between hypothesis testing and p-value.

In statistical analysis, it is hard to understand or even use the concept of P-values without proper knowledge on the aspect of the confidence interval (CI). Confidence interval (CI) is a range of values that are well defined, and there is a quantified probability that the values of a parameter lie within it. This simply implies that; the confidence level represents the proportion of statistical data within which the true value of the corresponding constraints is contained. A confidence interval is, therefore; a range of values that act as a reliable estimate of an unknown parameter (sample or population).

In conclusion, for us to get a better understanding, it is sensible to compare the concepts of point estimates and interval estimates. A point estimate represents a single value parameter, for example; Means, Medians, and Percentile estimates. On the other hand, an interval approximates the series within which the parameters are expected to be contained. Nevertheless, confidence intervals and point estimates are usually used together hand in hand for reliability purposes. The main factor in estimating the size of an interval is the population or sample size, which are used in the estimation process (Schmuller and Joseph 99). Hence, a confidence interval is mainly used to show the reliability of the results obtained from surveys or observations. For example, in a voting survey to determine the voting intentions of people, the results might be that; around 40% of the total voters intended to vote for a particular politician. A 90% confidence interval would mean that the proportion of people from the whole population willing to vote for a particular politician would be 37%-43%.

“Non-Cooperative Games” is written by John Nash, Noble Laureate, and published in “The Annals of Mathematics” (Nash, 1951). The theory presented in the paper is based on an assessment of the interrelationships of available set of coalitions as a consequence …

Introduction Documentation in nursing practice is a term defined as anything written or electronically computerized which describes the medical history and status of the patient. Documenting a patient’s medical record is one of the most pivotal steps in the field … 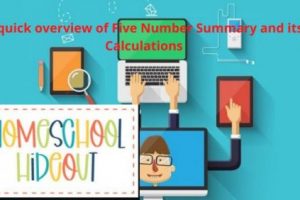 A quick overview of Five Number Summary and its Calculations