The Mechanical ventilation method for patients who are unable to breathe on their own is in practice since 1929. This mechanical respirator or “iron lung” was a metallic cylinder, in which the patient was inserted and connected to a vacuum pump that pushed air or oxygen into patient lungs (Slutsky, 2015). The loss of pressure in the lungs changed the geometry of the lungs which allowed air to flow in the lungs. This type of iron constantly monitored the air pressure in the lungs of the patient, and it allowed exhale of air when the pressure reached its maximum. 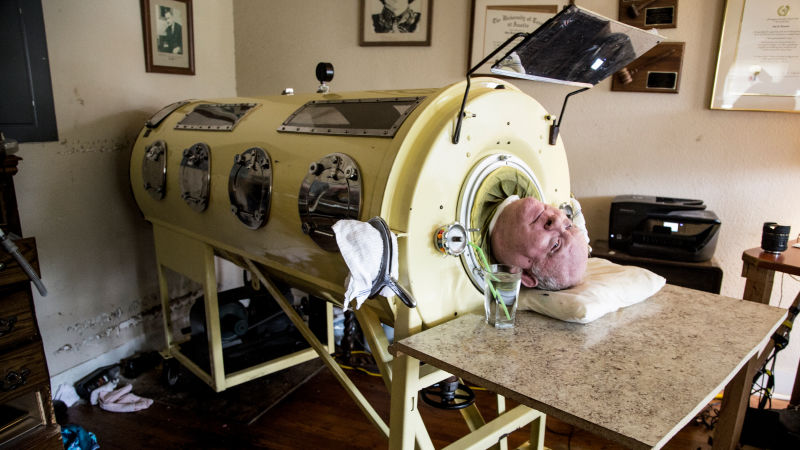 The mechanical ventilation technique was used initially for polio patients and used both positive and negative pressure building techniques to pump air into the lungs. These ventilators were also used in 1945 in World War II to facilitate breathing in jet fighter pilots flying at higher altitudes. The use of this technique in polio struck patients was reduced when the vaccination of poliovirus became common and nowadays they are used to facilitate patients in the ICU.

Obesity is the prevailing cause of many problems. There are surgeries and intervention programs that have tried to reduce the obesity rate, but their results were not so fruitful. Obesity also brings certain other problems with it that cause many long and short-term consequences in patients. The significant issues originating from prolonged obesity are diabetes, high blood pressure, and loss of stamina. However, a severely big concern also exists in case obese patients are admitted to Intensive Care Units and there is a need for a mechanical respirator to facilitate breathing. 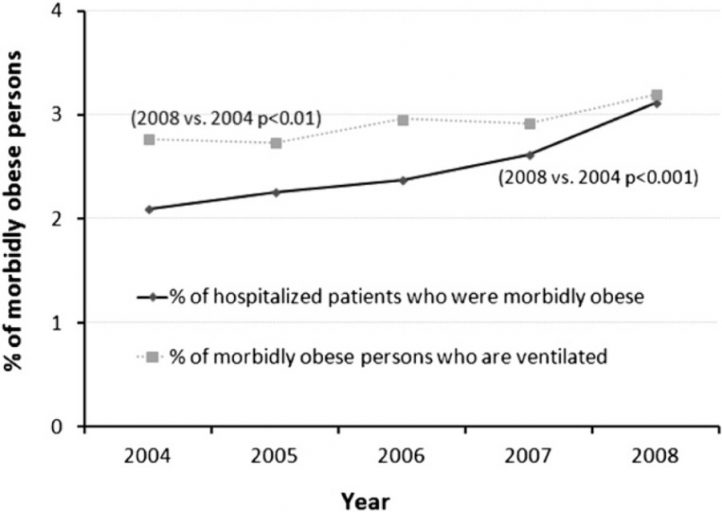 The percentage of morbid patients admitted to the hospital between the years 2004 and 2008 as shown in this graph depicts that the rate has increased substantially for obese patients in these four years (Fig.2). The percentage of morbid patients has not increased substantially, but the stats show an increased rate of patients who need ventilation (Cheney., 2014). This fact has created a concern to modify the ventilation process for obese patients as they have been observed having trouble with the normal methods.

The complete or partial collapse of the lung accompanied by increased weight on the thoracic wall as well as increased weight in case of patient movement creates additional problems in breathing. These conditions worsen after the patient is induced with anesthesia as the patient loses consciousness and the risk of any abnormality increases. The increased prevalence of heart diseases and blood pressure among obese patients leads to comorbidity which makes it more difficult to manage their treatment in ICU. Having a 30 to 70% percent chance of sleep apnea among obsess patients creates more respiratory complications that are a must to be taken care of (Jong, Chanques, and Jaber, 2017). 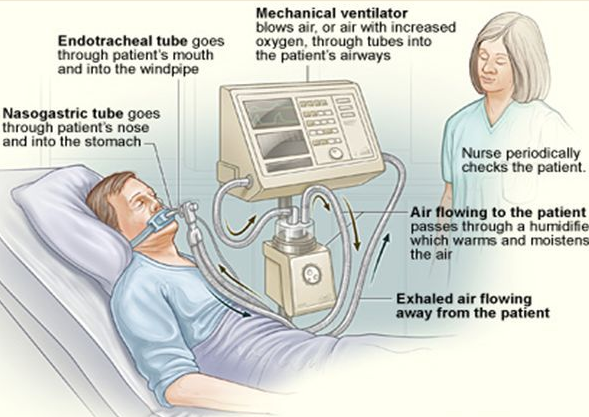 The mechanical ventilation process uses an artificial pump that assists breathing in patients who cannot breathe on their own. The process is carried out by a respiratory physician or nurse who uses the invasive or non-invasive technique of mechanical breathing. The non-invasive technique uses a respirator that is fixed on the patient mouth, while in the invasive technique a tube is inserted into the patient’s trachea that is accompanied by an inflatable balloon. The tube is attached to a pump that pumps oxygen directly into the lungs at regular intervals. The purpose of an additional balloon in the technique is to position the tube inside the trachea safely. The ventilation can be both positive, i.e., pushing the air into the lungs, or negative, i.e., sucking air into the lungs. The technology has now developed to be effective for use in morbidly obese patients.

Indications and Contraindications of mechanical ventilation

Various studies are in place that is aimed to facilitate breathing in obese patients. These methods of mechanical ventilation keep the breathing process regulated. With the increased level of inflammation in obese patients, leptin levels increase which increases airway obstruction (Jong, Chances, and Jaber., 2017). The increased level of adiponectin also triggers macrophage response which also increases airway obstruction. Due to all these reasons, mechanical respiration in obese patients is both necessary and sensitive. 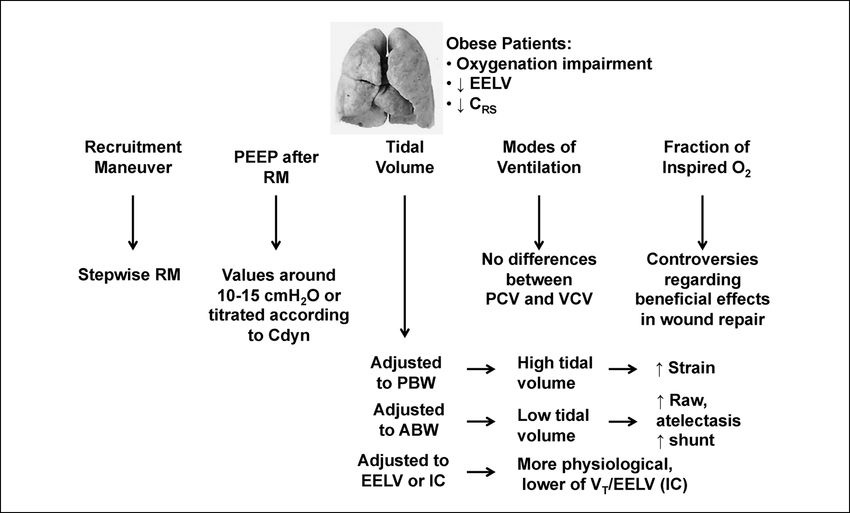 The first research uses recruitment maneuvers to facilitate breathing. By modifying adequate lung pressure, end-expiratory pressure, tidal volume, and a fraction of inspired oxygen the combined effect of all these modifications are used to facilitate breathing. The ratios and constants are carefully calculated by considering body weight, inspiratory capacity, and maximum lung capacity (Fig.4). The use of recruitment maneuvers with end-expiratory pressure works better than the use of only end-expiratory pressure and careful regulation of tidal pressures by considering body weight would demonstrate benefits of this system (Jones, Gittens, and Manuel., 2018).

It was also observed that with an increasing rate of obesity high tidal volume is required. A study that used the increased tidal pressure technique in class III obesity patients found it more beneficial to keep the pressure within the limit of the maximum endurable pressure of the lungs (Kalra et al., 2017). The process used low trans-pulmonary pressure which was observed to give additional protection to morbidly obsessed patients.

The invasive mechanical ventilation techniques are the volume-controlled methods of oxygen injection in the lungs. A very large oxygen volume can cause internal injury to the lungs and a very low may not complete the body’s oxygen intake. One study uses the method of lower volume and increased rate of oxygen intake in obese patients to be an effective mechanical respiration strategy. The low oxygen volume with improved oxygenation rate and respiratory compliance was found helpful in facilitating obese patients in ICU (Maia et al., 2017).

With the improvement in methods of ventilation for obese patients, the rate of mortality in patients due to insufficient respiration is expected to decrease in the coming years. The improved method of facilitated respiration and low volume high rate of supply of oxygen is also expected to decrease this rate substantially if its adaptation in a hospital environment is increased. There is a need for more advanced methods of ventilation in the invasive type of mechanical respiration as it involves more risks and it is sometimes inevitable when patients reach a limit their lungs are completely incapable of inhaling lungs. The process is slow and critical as it involves certain variables that are to be evaluated by careful calculations. Therefore, it needs more advanced tools for the measurement of metrics like lung pressure, the rate of oxygen intake, expiratory capacity, and maximum lung capacity of the patients. However, once this method is made common and available in healthcare organizations worldwide the rate of mortality in obese morbid patients will surely reduce.

Why I want to Enroll in Harcum’s Radiologic Technology Program

I am an ambitious being. I have always been committed to excel in my studies; therefore, I used to devote more time to my education and allocated fewer hours to extracurricular activities. Later on, in high school I have set …