Furniture and interior design have evolved to some considerable extent as people adopt various models for theory office, homes and any interior building designs over the years. Interior design is the science as well as the art in which artists enhance the interior side of a building to realize an aesthetically pleasing as well as a healthy environment. Aspects such as researching, planning, and coordinating are the managerial functions that an interior design employ in this daily work. As a science, interior design can be regarded as a multifaceted profession that entails the development and execution of the selected model. Over the years, different personalities have contributed through their work towards the development and evolution of interior design. One of such people is Jacques-Emile Ruhlmann, a French man well known for his artistic work in Art Décor Style, manufacturing items like pianos, cabinets, and chairs out of wood.

Jacques-Emile Ruhlmann happens to be a famous interior decor artist hailing from France who utilizes furniture for his interior designing work. He was inspired by his parents who primarily participated in decorating business and hence saw him take it over after his father passed away. He has tremendously impacted the interior décor art world. In the year 1919, he contributed to the establishment of Ruhlmann et Laurent, a company specializing in interior designs. The company also engages in the production of home products like wallpapers and different lighting. It focuses on the formation of elegant furniture designs using exotic and precious woods, which he combined with ivory fittings (Bryant and David 146). The classical design elements coupled with craftsmanship ideals that existed in the furniture’s back in the 18th century were the source of his most potent inspiration. The artist later shaped the same old ideas into what he referred to as precious pieces. They occurred between 1918 to 1925 and happened to be his favorites. They were curved using rare woods like Brazilian rosewood and amboyna burl or a combination of both. He would transform them from simple to slight curves.

Also, the company also produce home products in the form of wallpapers, furniture as well as lighting. Through the Ruhlmann et Laurent Company, he focused on the formation of hence giving his products a classic appeal to the users. According to Jacques is regarded as one of the loudest promoters of Art Décor style using furniture and interior design. Ruhlmann is someone to envy because he is among the pioneers of putting art to interior design. He has been of the opinion that beasts determine that salvation of art, and hence he employed spirits of the age of a 19th century, and that is the reason he is the artist of my choice. His work, however, does not involve ornaments. Instead, he fashions his wooden work but instead utilizes the most exotic materials, which include metal, different wood, and ivory as well. This further propelled Jacques as the artist of all times concerning post-war conventional as has been enthusiastic to show the world his enormous wealth in art and taste. Going by his achievements, he has the potential to inject life of aristocratic classical era of the past into the modern world (Rappolt and Mark 145). I would like my art to design for me such a wooden and leather graced chair such as his Macassar-ebony chair he planned. He utilized leather made by hand tools, and a single unit sells for at least $ 28,000 that changes the ambiance of the club atmosphere while compared to modern designs. It has been manufactured using semi-precious rarely found materials that exhibit opulence. This is a work that is not showy nor gauche, instead of a plan that gives a luxury feel and not ostentatious.

The elegance exhibited by the Macassar chair is of untold beauty. On comparing it with modern furniture, the latter reveals the excessive decoration that is employed in making of contemporary club chairs and dark-figured wood. Ruhlmann designs were not intended to be vying for attention, but now naturally command it as shown in the photo below. 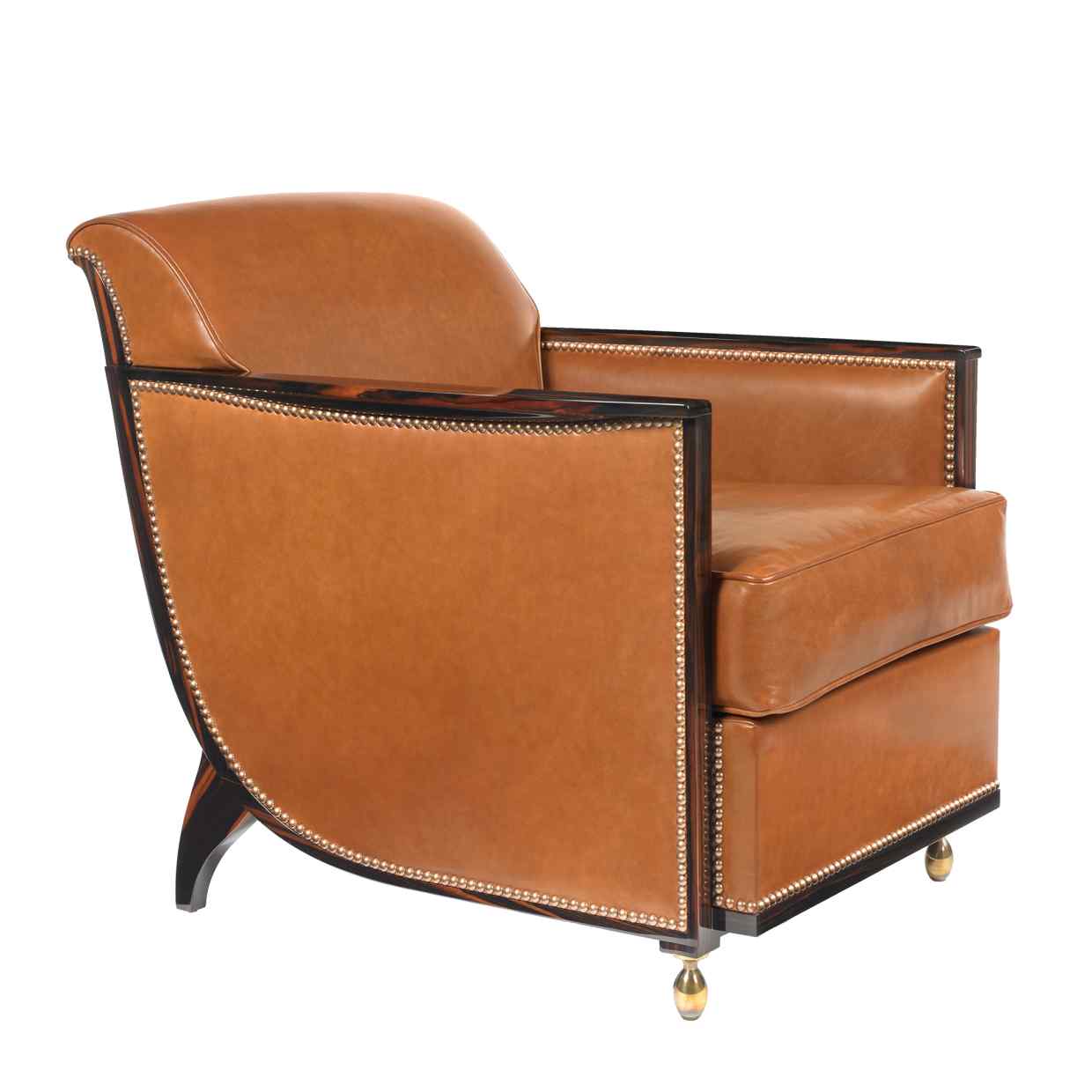 Aesthetically, his is a style that is a mixture of drama and fragility. It is redefined style and viewed as shamelessly elicit, with the interior décor having passed through both modernist and egalitarian revolutions. He once pronounced that “only the very rich can pay for what is new and they alone can make it fashionable”( Abercrombie and Stanley 194). These utterances are still valid up to date. Ruhlmann’s style of making wooden furniture is both contemporary and feels homely to have around.

Renowned modern-day designers such as Accouter hailing from London confess to having been inspired by Jacques as clients have contracted them for the creation of lavished homes themed by Jacques’s style of interior décor can be said to have phenomenally excelled in his now vibrant career due to Jacques inspirations. His most favorite item is the diamond patterning which is seen in a variety of cabinets that gives the final product paneling finishing concepts that makes a living area transformed. Ruhlmann career is founded on the post-World War in France hence managing to draw a clientele from the wealthy and entrepreneurial class of the time. These were a category of people who were eager to show off their wealth and sophistication through art, making Jacques aristocratic styles of the ancient times look appealing and also accessible, particular a group that called themselves “new loyalty” who raised his ratings even higher in France (Vanlaethem et al., 119).

Different exhibitions have been held in his name in different locations as “The lines in his furniture often have a slight swell or curve as if the wood were breathing.” This is the slogan he is best known for. For instance, in 2004 his work was the subject of a huge retrospective exhibition that was held in New York US Metropolitan Museum of Art, which happen to be one of the most frequented museums in the world, due to its rich history. Again, in the year 2009, the American Media-New York Times recognized him to have been contributed immensely in the decorations world and crowned him as “Art Décor’s greatest Artist.” This shows that he not only excelled back in the Ancient times but also the unending legacy that lives on, in the field of décor and uses explicitly of furniture in his artwork (Bryant and David 146). Another event that propelled his career is industrialization leading to increased demand for his works which as well famed his name. The future artist drew a lot of inspiration in the field of décor. The fact that his work can transform rooms into adorable things through his mastery and use of furniture in itself is marketing enough for Jacques ( Laidlaw and Christine Wallace 90).

Other designers have taken Ruhlmann’s style aesthetic design and twisted it in several gears. One such artist is David Linley, who is synonymous with a décor style that is refreshed, and come with “the Suits Linely Interior Design” that is made at Coleridge. His numerous cues in the designs have emanated from Ruhlmann. For example, he says, “there is the bow front of a desk, the fluting on a torpedo leg and the fine lattice stringing on a chiffonier.” While the art décor line of Linley has been literal for a given period, coming up with new pieces, have been nothing but experiments. He continued and added that “Ruhlmann’s work was not a pastiche of what had gone before; instead he modernized traditional techniques and steered makers to innovate” ”( Abercrombie and Stanley194). These sentiments can be seen evidently through the Graft Collection that saw the collaboration of Designer Simon Hassan experienced. Console tables go for $ 5,950, and side tables for $ 2,750 which have been finished using marquetry brass and steel showcasing the unique nature of wood. This strikes a rich, glamorous cord that can be traced back to the 19th century. Ironically, it unmistakably looks like it belongs to the 21st century. The marquetry items depict perfections that had been worked out before production and had been themed to appear as Jacques works. It portrays a fresh accent in a finely growing and individually rare category of design.

In conclusion, it has taken time to see art décor to get where it currently is. However, much of its fundamentals can be borrowed from its past and those artists who have been actively involved in it. Despite being in the ancient World War times, his work skills and products in the field cannot be overlooked. French architects association commemorate his work in the robust art world, as well as using it as an indicator for the future of development of architectural art designs. He is the originator of the taste of high style in France having come at a time when the field of interior design in furniture was unknown. Combined with his aesthetic refinement, excellent artistic techniques and utilization of rich material positioned his work at par with the exquisite artists of the 18th century.

Should Marijuana be Legalized?