Accessibility to good health is the right of every individual in society in reference to Daniels (2017). However, the cost of medicine in health institutions may be high, hindering other people to enjoy the right to good health in any country. Following the high cost of drugs, the authority of Australia decided to subsidize the cost of medicines in the health sector in order to allow everyone to get treatment. According to Brett (2017), the government provides the drug subsidization program under the Pharmaceutical Benefits Scheme. The Australian government through a legislation process started the program in 1944. This paper is going to do a critical analysis of the program by comparing the cost of drugs under the program. Besides that, it will elaborate on some problems encountered in the program and lastly the reason for high drug consumption.

Pharmaceutical Benefits Scheme refers to a program established by the Australian government to offer subsidies on the prices of medicine according to Faunce, (2015). This program began in 1944 through the leadership of Curtin Labor. The Australian High Court brought down this government when it decided to subsidize antibiotics in the first place, however, the program now continues. Citing the work of Garrety (2016) program came again in 1948, this time around, it was offering services to pensioners and providing free-of-charge medicine to the citizen on antibiotics. When it comes to the public, for one to enjoy pharmaceutical benefits services, he or she must have a specific medical card. On the other hand, people outside Australia may also enjoy the scheme through an agreement with the government. PBS is established in law under the National Health Act of 1953 and now it has become an essential part of the National Medicines Policy in reference to Ghabri & Mauskopf (2017). This program did not achieve much at the beginning; however, many people started enjoying the fruit of the program in 1960.

Maintaining the provision of a subsidized health program is costly and requires more funds. The people who fund this program are the citizens. They pay some amount to finance the medicines outlined under the PBS program. From the statistics, it is evident that the Australian government spent more than $9 billion from 2014 to 2015 to finance the project according to Karanges (2016). Consequently, the amount of money spent on prescription subsidized is increasing each year. The reason is that more people are joining the program and more drugs are listed under the subsidization program. To the government report, the patients contribute $6 to maintain the program. On the other hand, some individuals need more drugs annually. These groups of people spend more money compared to the others and in order to include them in the program, they are catered to through the safety net program. Referring to the department of health, there are drugs that fall under the Pharmaceutical Benefits Scheme citing the work of Liu (2017). The report names more than seven hundred drugs under this program. However, the number of drugs increases annually, and the government updates society every now and then. Members of society consume a lot of medicine because of the subsidized process. On the schedule provided by PBS, there are groups of medicines that are listed in the program. The first group of medicine is general medicine. These groups of drugs are available in pharmacies and can be accessed by all members of society; this is why they are called generic medicines in reference to Mellish (2017). The second group of medicine is the veteran’s medicine. A veteran is a person who has long experience in the field of medicine. These people also enjoy subsidized medicine through Repatriation Pharmaceutical Benefits Scheme (RPBS). The department of veterans controls this program. In the department, the drugs, which are subsidized through PBS, are listed down. There are other benefits to these people as well; this includes the care for wound services. From the report provided by the department of veterans, the government spends at least $355 million on this program. In addition to the two groups of medicines, other drugs may need special care such as dispensing and administration. The above drugs may not be handled by pharmacies and they need special arrangements from the department of health(lean for sale).

Page (2015) says that apart from the above listing, the government has also established ways of supplying medicine outside the Pharmaceutical Benefits Services. There is some rare condition that citizen may encounter, it is, therefore, necessary to provide drugs that prevent those conditions. These drugs are grouped under lifesaving drugs. Moreover, before listing any medicine to fall under the PBS it requires some analysis. The authority has a group known as the Pharmaceutical Benefits Scheme Committee, which analyses a medicine before doing the listing according to Parkinson (2015). When a patient needs a medicine that is not listed under PBS, he or she has to cater for the cost fully. Apparently, the statistics show that the government is spending more on this program. For instance, the following table shows the government expenditure on PBS relative to the Australian population. In the expenditure, the government also incorporates the pharmacy that helps in fulfilling the program. There are several medicines dispensed by the pharmacies under the PBS program. According to the PBS website, it shows that as the year moves on, the amount of money spent on medicines increases. The population of the Australian country is also increasing. See the statistics in the figure below. From the statistics, the government spent a lot between 2004 and 2005. This issue may have been incurred because of the increase in population and the increase in the price of each subsidized drug. However, there is a drop in expenditure from 2006 to 2007 as shown in the graph below. 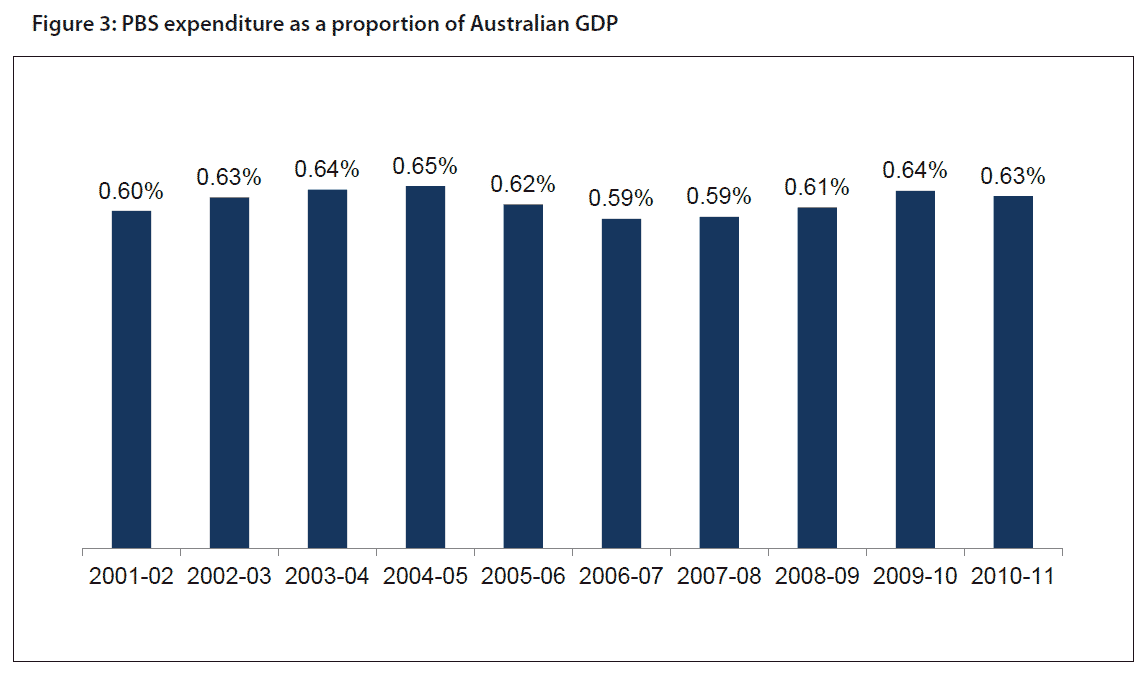 The graph above is according to Schaffer (2016).

On the other hand, the graph below also provides the top ten drugs that have been enrolled in the program since 2012.

The above graph is in reference to Pearson (2015).

Despite the subsidy provided by the authority, there might be other expenses that the patient may be entitled to during the treatment. These expenses are not counted in the subsidy program. For instance, the pharmacist may tell some other emergency dispensing fees a patient during a consultation with the pharmacy. The patient should pay these expenses. The program of subsidization has been introduced to many health services and pharmacies, the only issue is that the individual should present his or her medical card to enjoy the program. The amount of money paid when issuing the health card differs in reference to Pearson (2015). There are individuals that go for the safety net program, these group of people incurs more than other citizens. They need more drugs annually to prevent the conditions or other disorders in their body. Pharmaceutical Benefits Scheme has been also introduced in private hospitals in Australia. The reason for the introduction is that the government aims at providing good health to all citizens. The people who are legible for the PBS services are usually issued with different cards. For instance, the card issued to the public differs from the one issued to a veteran. An outsider may also enjoy the services; the government verifies these people with the passports they possess. However, the amount paid usually differs. The outsider pays a higher amount compared to the normal citizens. All the steps ensure that each one who lives in Australia is accessible to good health.

For the government to provide quality health services to citizens through this program is not a walk in the park. There are various problems during the provision of this service. For instance, when any medicine needs to be listed in the PBS program, an analysis is carried out. The Pharmaceutical Benefits Scheme Advisory Committee does the analysis. This analysis comprises the cost of the drug. The process of doing this analysis takes too long and many people usually lose hope in the process. It usually goes up to seventeen weeks. After doing the cost-effective analysis, the committee presented, the recommendation, and budget to the parliament in reference to Schaffer (2016). The parliament needs to pass the budget. However, most of the budgets passed on PBS are mainly at the cost of ten million and above. The high cost leaves the public on whether their money is well used in the process. The main source of funds in the subsidization of medicine is mainly the taxpayer’s money. The parliament needs to consider the public before making the amount to be higher. The reason why public opinion should also be incorporated here is that in the recent budget, some medicines were scarped due to high prices.

PBS schedule provides reliable health services to the people of Australia. The process gives the less fortunate people an opportunity to access good health services like other people. However, the government should consider public opinion before setting the amount to be contributed by citizens. In addition, some citizens misuse the program. They take the opportunity to consume more drugs than expected which is why Australia is registering high drug consumption. The authority should come up with a mechanism to control drug consumption. The people who need emergency services should also be given the services at ease. It is good that the scheme has also united the private hospital to provide subsidized drugs.

Ghabri, S., & Mauskopf, J. (2017). The use of budget impact analysis in the economic evaluation of new medicines in Australia, England, France and the United States: relationship to cost-effectiveness analysis and methodological challenges.

The increase of Crime rate with the advancement of Technology

Introduction Diabetes has an effect on body’s ability to maintain normal level of glucose (sugar) in the blood. When the body turns the food into sugar, this conversion is introduced into the bloodstream. Whenever the amount of sugar increases, the …

Substance Use & Co-Occurring Psychiatric Disorders in the US

Introduction The contribution of substance abuse disorders (SUD) to mortality and morbidity has increased substantially not only in the United States but worldwide. In 2014, drug overdose caused more than 47,000 deaths and it has remained a leading cause of …

Why do I want to be a radiology technologist?

A radiology technologist is central to a patient’s diagnosis of diseases and injuries. By employing state-of-the-art equipment, a radiologist produces images that aid medical professionals in making an accurate judgment of the patient’s condition. My passion for this field is …