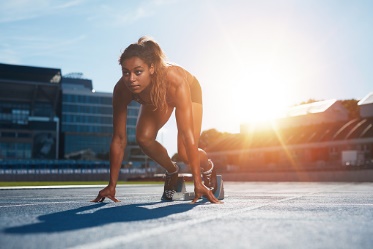 The respective image is of a female athlete who is ready for her race. The model refers to the contemporary standards of feminine beauty. The layout of the image focuses on the feminine figures of the model rather than the athletic exercise she is participating in. The model is young, slim, and tall. She has dark color skin with toned and gleaming muscles. She is presented in such a manner so that all the viewers are attracted to her toned body. As stated in the article, “All these conventions serve to invite the spectator’s gaze, giving the power to the spectator, which, in this case, has been identified as the male consumer” (Media S1). The shine on her body is due to sweat which is deliberately shown to attract the audience towards her figure rather than the race she is going to start. When the posing aspect of the model is analyzed, it also shows that model is looking away from the camera so that the gaze of the viewer openly analyzes the figure of the model. As far as the sports accessories are concerned, the image shows that the model is wearing her sports joggers for the race. The model is emotionally connected to her race. The image not only focuses on the form of her body but also shows functions. By looking at the image, we can say that the model is shown concentrated towards race. The uniform is merely visible in the image. Her facial expressions show determination. The amount of skin exposure is less than other female athletes. She is composed and her posture reflects that she is going to start her race.

SI (Sports Illustrated) Swimsuit Issue and ESPN: The Body Issue are two sports magazines that are known for objectifying female models in the name of swimsuit costumes and sportsmanship. They present the models in such a way that the viewer focuses on the feminine figures of the model (form) rather than the function of her image. “For years, women were denied their rightful place on the cover of SI, unless they were wearing almost nothing at all, in which case the cover was all theirs” (Brennan, Christine, Sports Illustrated). As validated in the quote, Women athletes have always been subjected to feminine objectification in sports magazines. They are mostly presented in such a manner as to attract the male gaze to their figure. On the other hand, male athletes are always portrayed as powerful alpha figures who are ready for their ultimate triumph.

Understanding the Concept of Variance

Introduction Football is a widely played and watched game in the world; with over 200 teams and 24 percent viewership worldwide. This high percentage of viewers, in turn, contributes to high loyalty to football teams, clubs and players. Football fans …

Breaking barriers of gender and race, Jacqueline Joyner-Kersee is an inspiration, therefore, an excellent choice for this blog post. A retired American athlete, Joyner-Kersee is regarded as one of the greatest sportswomen of all time. As a track and field athlete, …