Extra Space Storage Incorporation was founded in 1977 in Utah USA by its founder Kenneth Woolley. It is a public limited company listed with NYSE as EXR. The company is dealing in real estate business. Extra Space Storage is ranked as the second-largest real estate company in the USA and is a self-managed and self-administered real estate investment trust (REIT). The company is highly profitable and rapidly growing organization, in 2019 it has about 1800 self-storage stores in 40 states. There are 3624 employees working in different states at different locations. The company’s initial offering of stock was held in 2004 pubically in New York Stock Exchange with the ticker symbol of EXR. Initially, the company was registered as a limited partnership firm with the title of Extra Space Development Co in 1977. Most of the real estate property is owned by the company, about 180 sites are owned by the joint venture partnerships, and about 450 among the total sites are owned by third parties, however, these are managed by Extra Space Storage in return they charge a certain amount as their fee. The company is basically constructing its own building and then rent out them to earn money. The company owns and operates more than 1400 facilities. Extra Space Storage Inc. owns, manages, operates, develops, and maintains all its facilities and buildings.

The company is one of the top self-storage companies, it offers rental facilities to its customers. It is a leading company, its revenue in 2018 was $1.1 billion. The company is providing distinctive services to its valued customers. It provides discounted rental trucks and offers various storage unit options. All its facilities are well equipped and most of its customers are highly satisfied with its services. All the storage units are having electronic gates with security codes, there are climate controlled storages, covered and uncovered vehicle storage. There are individual door alarms, and every site has a manager to deal with the queries, and complaints of the customers, and provide the best services. It provides an online reservation facility and an online rental discount. The company is the second-largest and fast-growing company after Public Storage Inc. It has outclassed all its competitors, its major competitor is Public Storage with above 5000 employees and $3.1 billion in revenue. Other competitors include CubeSmart Self Storage, Life Storage, Strong Express, Metro Self Storage, MiniCo, and Strong Post.

The Extra Self Storage company is rapidly growing with a pace of 3.2 % yielding dividend. The company growth is positive in the first quarter of 2019 due to its extraordinary performance, packages, and services. Due to the favorable market trend and customer flow, this industry has the potential to flourish. According to the below-given graph the company is continuously growing during the last three years. 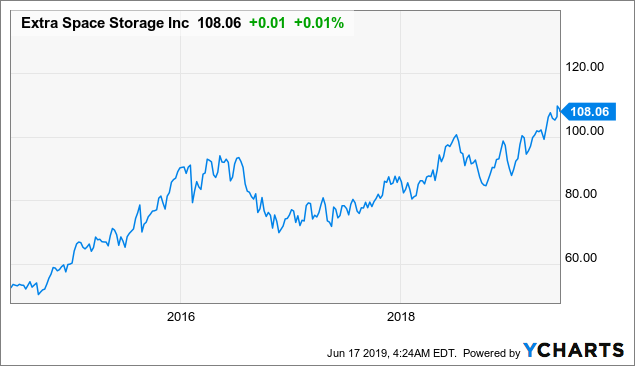 The above-given graph shows the revenue of the Extra Space Storage company, the growth during the first quarter of 2018 was 4.2 %. Its net operating income also raised up to 4.8 % every year despite the fact that 20 basis points have declined in the occupying ratio that is 91 %. During the first quarter of 2018, the company has acquired two new stores through a joint venture partnership and planned to invest in 12 more stores with an investment of $222.3 million. In 2018 and onward the company had added 46 new stores through third-party management platforms. The third-party management is also highly profitable, and the company is managing these stores against its specific management fee.

The storage units in urban areas are more expensive as compared to the small towns. The average cost of urban stores is $ 100 per month per 10X20 area. The highest price in urban areas is up to $ 200 and in small towns, it can go down up to $40. It also depends on the covered area, a small space is cheaper than large-sized storages. The 5X5 units are as low as $ 5 while the 20′ X 25′ storages are $ 300 per month in the same unit.

The company is offering tenants to both individuals and businesses, it is a US-based industry. This industry is flourishing in the USA, and currently, there are above 52000 storage facilities across the country. On the basis of revenue, the company is holding a 2nd position in the industry with $1.1 billion, while the top company is Public Storage with its revenue $3.1 billion. Other closest competitors are Life Storage with $6.21 million, CubeSmart has $558.5 million, and Storage Express has $6.5 million. 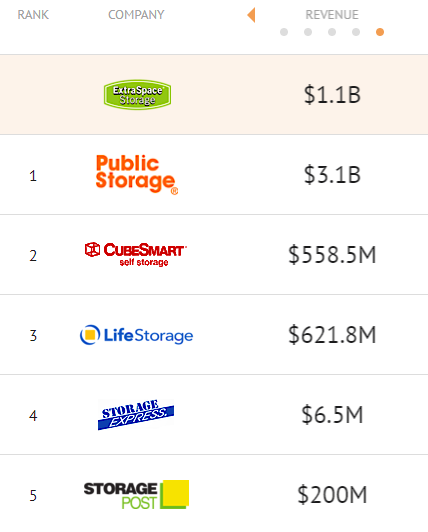 The company is highly profitable, and most of its storage units are owned by the business, some are through JVs, and others are third party ownership on the basis of its management fee. The gross margin of the company is 73.3 % in 2019, and it was 73.5 % in 2018. It is a significant value, and it shows the profitability of the company. The operating margin of the company is slowly increased in the past five years from 46.5 percent in 2015 to 49.4 % in 2019, however, the growth was consistent during this period. Return on Assets of the company is 5.35 % in 2019 which is raised continuously within the last five years from 3.61 % in 2015. While the return on equity of the Extra Self Storage in 2019 is 18.01 percent which is a significant value, and it attracts the investors to invest in the company. ROE in 2015 was 9.87 % which has rapidly soared during the last five years. The major strength of the company is its competent management team, its distinguished services, and loyal customers. The loyalty of the customers is based on the satisfaction of the customers. The company is rapidly growing in terms of its revenue, storage units, and a number of employees. So the company has outclassed all its competitors, and soon it will become the market leader of the storage industry.

Here we will discuss the capital structure of the company. We have complete data of the fiscal year 2019, all the values in the below table are in million US$. The interest coverage ratio of the company is 3.45 which shows that the company can easily pay its interest expenses. The company’s financial position is much stronger than its competitors, it has higher revenue and net profit than most of its competitors.

The storage industry is rapidly growing, and the market trend is in an upward direction, so there are a lot of business opportunities, and the company can increase its revenue. The online booking and the involvement of Ecommerce can provide endless opportunities for the growth of the company. Moreover, the third-party ownership of storage units partnership is highly profitable. As it doesn’t require any investment in the company.

Extra Self Storage is a public limited company including the board of directors and management. The top management team includes CEO, CFO, and the heads of other departments as shown in the following organogram of the company. 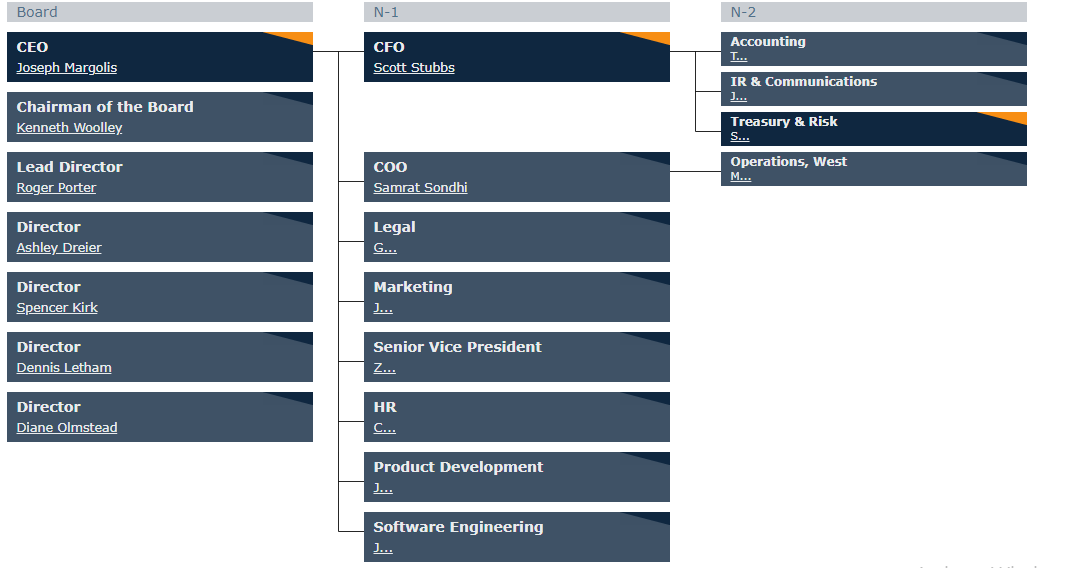 The income statement of the company reflects that the company is highly profitable. The DCF analysis shows the NPV of the future cash flow to the stock of the company. The intrinsic value of EXR is $ 71.24 to the current share price of the company that is $80.46. The multiple valuations of the company are 22.39, while the industry median is 17.40. the company is ranked as 72 % lower among 572 companies within this industry. The beta value of EXR is 0.44 which shows that the share price of the company is fairly sensitive to the volatility of the market for the last 5 years. If this value remained the same in the future, the share price of the company will be raised from the market. However, it will fall rapidly if the market goes down. Investment in the real estate business has a low risk in a number of ways. EXR is usually having short term lease, so the risk is mitigated to a greater extent. However, the weak economic conditions and intense competition in the market makes it sensitive. The major risk for investors to invest in this industry includes oversupply and financial risks. The oversupply refers to the exceeding supply of storage units than the market demand. Oversupply is common in the REIT industry. Most of the REIT companies are having higher debt financing, so the higher interest is paid which can lower the net income of these companies. The higher interest rates and the oversupply has affected many companies in this industry.

1 Introduction The “Chrono United” is a USA-based company that deals with the selling of authentic timepieces, sports, and luxury watches. The main and only branch of the company is located in the design district of Miami. There are several …

With its headquarters in London – England, Burberry is a luxurious British fashion brand. It designs and distributes a range of items that include apparel, footwear, eyewear, cosmetics, fragrances, fashion accessories, and leather goods. The brand was established by Thomas …

Abstract Rustic Americana is a subsidiary company of Largo Corporation and deals in arts from American heritage. Even though it has an eye-catching art collection, its sales have declined. This document outlines the plans to address the declining sales of …