This article presents new empirical evidence on the relationship between non-standard work schedules and children’s well-being by extending previous literature on the work-family conflict framework. A considerable body of literature claims that unbalanced work rosters have a significantly negative impact on the children’s emotional and social well-being. However, very few attempts have yet been made which examine the diverse mediating factors and fathers’ work schedule impacts on children’s well-being. This paper is filling these research gaps via using a unique dataset Families in Germany Study (FiD). The authors got motivation for this research from two different theoretical frameworks: 1) work-family conflict and 2) the conceptual resource. The research hypothesis of the study is developed via combining these two frameworks which is: Why non-standard work schedules may have an impact on children’s emotional and social well-being and what factors may mediate this association. In addition, the authors assumed that child development is indirectly effected by parent workplaces via parents’ labor activities effect. And non-standard labor timetables have an influence on the parent’s physical and mental health which ultimately will disturb the childcare behavior (Li et al., 2014). As far as a research methodology is concerned, the importance of mediation effects is examined through the bootstrap resampling technique, and mediated impact of non-standard working timetables on children’s emotional and social development is studied through random intercept models (multi-level modeling technique). A formal demonstration of the three different research models is simply explained in the following figure. First of all, the (a) model deals with the influence of independent variables on the mediator. Second, the (c′) model reports the direct effect of an independent variable on dependent including the mediator. Third, the (b) model describes the impact of the mediator on the dependent variable. 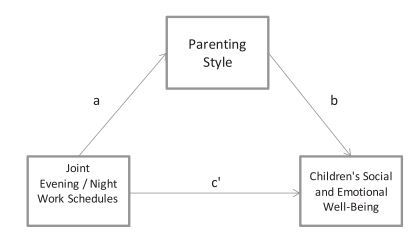 The empirical analysis of this article is based on the data from Families in Germany Study (FiD) collected in the years 2010-2013 (Wagner, Frick & Schupp, 2007). Data on the child well-being for ages 7 to 8 and 9 to 10 is used from two recent waves of this survey 2010-11 and 2012-13. The final sample of the study consists of 838 observations of child-year in dual-earner families. Working at nights or in the evening is used to define the non-standard work hours. As far as dependent variables are concerned, emotional and social well-being (the problem of behavior) are measured with SDQ (Strengths and Difficulties Questionnaire) which covers four areas: peer problems, conduct problems, hyperactivity, and emotional symptoms. Severe control and undesirable communication variables are used to construct a parenting style instrument (mediators). The control variables include education of parents in years, monthly net household income, occupational status, weekly working hours, migration background of father and mother, use of child daycare, mother age, number of children in a family, and child gender.

The key finding of the paper is that both father’s and mothers’ non-standard working hours i.e. nights and evenings are associated with an increase in the children internalizing (peer problems and emotional symptoms) and externalizing behavior (hyperactivity and conduct problems). This relationship is to some extent mediated by fathers’ and mothers’ strict and harsh parenting, with significant mediation impact of fathers parenting. On the basis of child SDQ rating by fathers, when both father and mother worked non-standard hours, child behavior is directly and indirectly affected by mothers parenting due to negative communication and strict control. On the other hand, on the basis of child SDQ rating by mothers, the relationship between child behavior problems and nights/evening working hours is significantly affected by fathers’ strict and harsh parenting. Another important finding of the study is that conduct problem increases when either both parents or only mother worked in non-standard working hours. The authors separately re-estimated the models for highly educated parents and low educated parents. The results describe that mothers from low education families reported higher SDQ scores as compared to mothers from highly educated families, assuming that both parents worked in night/evening hours (Strazdins et al., 2006).

Is non-standard working schedule especially evening and night playing any role in child behavior complications? If so, does strict and harsh parenting have importance in mediating such influences? The article in hand is an attempt to answer these problems. On the basis of SDQ scores, empirical findings conclude that non-standard working hours parents stated more children’s behavior problems, and this relationship was mediated (partly) by harsh and strict behavior of parents. These findings have strong practical implications and are in line with previous studies like (Strazdins et al., 2006; Colman et al., 2009). An important implication of the study is that the father plays a key role in children’s emotional and social well-being. Moreover, parents’ highly educational background did not show a stable pattern. The article also highlights the spillover impacts of one parent employed at night/evening jobs on the other parent, predominantly on the father.

The Development of the American Economy

Motivation is one of the most important factors in a student’s success. It can be difficult to motivate students, but with the right strategies and approaches, it is possible to create an environment that encourages learning and engagement. Here are …

Teaching is a great way to provide value to others and help people learn something new. With so many teaching opportunities available, it can be hard to decide which is the best fit for you. Here are some of the …

Top Tips To Protect Your Health During Online Classes

Whether you’re taking online classes or working from home, it’s important to protect your health. Here are some top tips to help you stay healthy while spending time on your computer. Get enough sleep It’s easy to burn the midnight …