The corporate strategy of Walt Disney is to create content that the whole family can see. They are not just focusing on kids but the entire generation. They want to have better innovative technology so that they can make the audience’s entertainment experience better. Another corporate strategy is to expand the business globally. The focus of the 2012 diversification strategy of the Walt Disney Company is organizational changes. It has been seen that it’s the people who make the company, so promoting them from within the company can help them achieve their ultimate objective of growth.

The personnel who works at Walt Disney knows better about the inner dynamics of the company. Originally Disney’s objectives were limited to cartoon production and promotion, but with the changes in the minds of the customers, they wanted something more than that which Disney adopted and tried to bring something new to the market. The strength of the family is not limited to animated cartoons but to its diversified portfolio of businesses in different industries like theme parks and resorts, media, Interactive media, consumer products, and Studio entertainment. The purchase of ESPN has created a drastic change in the way people use to watch their particular entertainment source. One of the key strategies for Disney is to enhance and improvise their core animations with innovative characters and skills. With the help of their broader target group by purchasing ESPN, they continued to be diverse[1].

Every single industry that Walt Disney has created a good revenue for them, but the Media network is generating high revenues than other industries. The long-term attractiveness of the company can be evaluated through its threats and opportunities, as well as the assessment of industry attractiveness.

From the case study, it has been seen that the revenues generated by Walt Disney interactive media are lower than Themes, parks and resorts, studios, media networks, and consumer products and which shows the unattractiveness of an industry.

Disney’s competitive strengths lie in the diversified business portfolio they have. Major strengths include a strong business portfolio, experience in achievements, diversification, and brand reputation. One of the major accomplishments of Walt Disney is they have continued working on their weaknesses and transformed them into their strengths. Technological advancement has created a separation of the industry. The characters involved in most of its motion pictures enable their consumer products to boost their sales. Though Walt Disney has created high popularity, this allows them to be differentiated from other competitors; it also enables them to be the strongest competitor. Media networks, along with parks and resorts, are the highest performer and generate most of the revenues for Walt Disney [2].

Nine cell industry matrix shows which business units of Walt Disney have the highest priority and which have the lowest. The matrix shows the strengths and attractiveness positioned by the different diversified companies. Business units having the greatest industry attractiveness and competitive strength show the overall performance of the company is good. Looking at the top left side of the grid reveals the high priority for resource allocation (Blue color), yellow color shows the medium priority, and pink color shows the lowest priority. The index shows that interactive media is the lowest performer than others. All the items in blue show high performance and industry attractiveness. These are the sources on which Walt Disney should focus and invest. 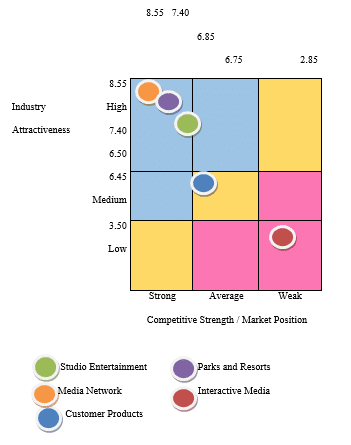 The financial and operating performance of the Walt Disney Company

The current ratio shows whether or not the company can repay its debts (Short Term Obligations). It can be seen that over the past three years company’s current ratio is coming above one, which is a sign that enables the company is making its short-term payments[3].

ROA shows how well the company is profitable against the assets employed, while ROE measures the profitability of the company by looking at the investments made by the shareholders against the profit that the company is earning. ROE and ROA of Disney are almost at average, as clearly shown in the table. The higher the percentage of the profit margin, the higher will be the company’s effectiveness towards costs[4].

Injustices in the contemporary society

Long-Term Versus A Short-Term Loan

Corporate bonds are a common method for companies to arrange capital for their business operations. Many investors around the world purchase bonds from large corporations against capital which the company returns with some interest (Lasker, 2021). However, there is a …

Dividends enable investors to receive a part of their return on investment frequently and in a shorter period of time. However, this payment can be made in several ways such as providing additional shares in the company or at least …