Hackers are a very interesting social group, in which there is a hierarchy. Some hackers run the processes, they are responsible for spreading the most dangerous viruses, astronomical financial and information losses of entire countries, and there are hackers on which the wines fall and who sit in prisons for other people’s crimes, writes ITtrend.

JONATHAN JAMES UNDER PSEUDONIM C0NRADE in 1999, at 15 years old, hacked BellSouth and the Miami-Dade school network, then went on to access the NASA and US Department of Defense database, downloaded software worth $ 1.7 million, as a result for the time had to close the whole network, which cost them in the end $ 41,000. He became the first teenager found guilty of hacking. In 2007, there was a huge wave of computer attacks on the Internet, Jonathan denied his involvement, but was accused of them.

Robert Tappen Morris is famous for having created the first known computer “worm” (warm), for which he was subsequently accused of abusing a computer for fraud. He began writing his “worm” while still studying at Cornell University.According to him, he was just looking for a way to measure the size of the Internet, but because of some logical inconsistencies in the code of the program, a “worm” got into the network, the actions of which led to losses of hundreds of thousands of dollars for a lot of companies. He served his sentence and now works as a teacher at the Massachusetts Institute of Technology.

Gary McKinnon, better known as “Solo”, in 2001-2002. hacked 97 computers of NASA and the US Department of Defense, removing critical files from them. Losses from his actions amount to approximately $ 700,000. As a British citizen, he was able to escape the persecution of the US government. 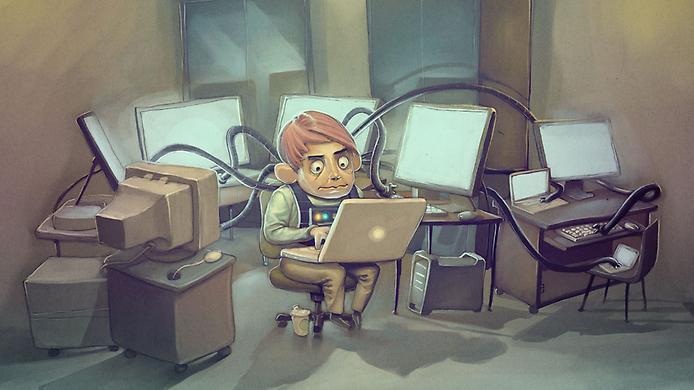 Kevin Mitnick, at 12 years old, provided himself with free travel on the backbone system of Los Angeles. In 1979, at the age of 16, he penetrated the network of Digital Equipment Corporation and copied some of their software.Kevin spent a year in prison, then escaped and hid from the authorities for two and a half years, hacking computers and cell phones to steal critical information. He was able to listen to FBI cell phones. In the end, Mitnick was caught and convicted. After a while, rumors spread that the hacker recruited US intelligence agencies as a consultant. Today Kevin Mitnick manages his own company Mitnick Security Consulting LLC.

George Hotz, known as geohot, is responsible for hacking iPhone and PS3. Having hacked and opened the codes of devices working on iOS, Hotz created a whole subculture of users who prefer to use a more open and customized operating system, which also includes content created by users themselves, and even hacked applications.

Then George turned his gaze to the Sony Playstation 3 game console. However, Hotz ran into problems after publishing admin console keys on his website, allowing other users to manipulate the PS3 security system. Sony sued him and won the case.

Jonathan James had a gift of programming. During his time, he was regarded as one of the most dangerous hackers in the united states and in the world at large. Born in December 12, 1983 in Pinecrest, South Florida, Jonathan at the age of 15years hacked NASA and caused a 21-day shutdown of their computers by using a simple pentium computer. Jonathan used an online name called c0mrade. He stole documents valued around $1. 7million as reported by NASA.

Between August 23 to October 27, 1999, Jonathan went on a hacking spree. He hacked various systems including those of Bellsouth, Miami-Dade school system, Defense Threat Reduction Agency(a branch of United States Department of Defence), NASA etc. He was arrested in his home January 26, 2000 by NASA and Department Of Defence agents and Pinecrest Police. Upon interrogation, Jonathan revealed he installed an unauthorized backdoor in one of the servers in Dulles, VA which he used to install a sniffer that gave him access to intercept over 4000 by Defense Threat Reduction Agency’s employees. He also revealed he had obtained source codes belonging to the International space station controlling life sustaining elements.

Due to his age , he could not be thrown into jail but rather faced a house arrest and ban on using computers. Jonathan suffered from a horrible depression and therefore shot himself death in his bathroom.

Under the pseudonym cOnrade in 1999, at the age of 15, he hacked BellSouth and the Miami-Dade school network, then went on to access the NASA and US Department of Defense database, then downloaded software with a total price of $ 1.7 million, eventually the authorities had to shut down a whole network for some time, which ultimately cost them a ridiculous $ 41,000.

Later in the interview James said: “The code itself was bad … and, of course, it did not cost $ 1.7 million, which they demanded for it.” In addition, Jonathan also sniffed an unlimited amount of information during the breaking of the database of the Ministry of Defense, including quite a few personal conversations between employees. He became the first child to be generally blamed for hacking

The story of James, however, ended tragically. In 2007, a huge wave of computer attacks took place across the web, Jonathan strongly denied his involvement, but was, nevertheless, accused of them and shot himself in 2008. Before the death, the burglar declared that he was not going to answer before the tribunal for the atrocities to which he had no business, because considers it shameful to be accused of such ill-considered, stupid actions.

Robert Tappen Morris – the offspring of the late Robert Morris, who was a co-author of UNIX, worked as a key specialist in the State Center for Computer Security and was in general a prestigious figure in the computer world.

James was able to hack into the NASA network and download enough source code to study how the International Space Station works and operates. The total cost of the software downloaded from there was 1.7 million US dollars. To assess the damage, NASA even had to shut down its network for three weeks, which brought NASA an additional 41,000 $ of losses. Here’s how Jonathan told the reporter about the reasons that prompted him to become a hacker and the state of security in the network.

In an interview he answered following question and explained the whole secrets of this case:

Question: What were your reasons for breaking into the networks of the US Department of Defense and NASA, committed back in 1999?

Answer – Well, I read the book “Cuckoo’s Egg” [Clifford Stoll], the story that is described there pushed me to the idea of trying myself in this matter. In addition, I was much more interested in hacking well-protected government facilities or corporate goals than ordinary private computers. It was a good feeling, to know that I have access to the computer of the most powerful military in the world. I’m surprised that my head did not explode from the excess of adrenaline.

Question: What do you think are the most common security holes in software?

Answer – Usually users do not hurry to download and install the latest updates. Users often ignore software update messages, so they often work on vulnerable applications. I guess they do not understand that outdated software is often unreliable, because someone has found a way to use it to gain control of the computer. Even after the vendor issues a patch for the new vulnerability, there are still a lot of people still using vulnerable software. Sometimes (probably not as rare as you think), companies do not update their vulnerable software for years, because the computer works as it should, and they work on the principle “If nothing is broken, it’s better not to touch anything.” And here’s another thing, do not use Internet Explorer …

Question: How did the hacking tools change in the last year? What new methods of influence have appeared?

Answer – The tools have become more advanced. In my time, I used a simple sniffer, and all the selected passwords were dumped into a text file. Now hackers have tools like Ettercap and Cain & Abel, with them you can do all sorts of crazy stuff. Anti-Malware are more advanced and more widely used, and now there are even viruses that install the antivirus themselves to destroy other viruses in the system. But, in general, the technique has not changed much: find a hole and use vulnerability in any possible form. Technologies will certainly develop. But, like any complex systems, they will always be vulnerable to something.

Whatever it was, but history with James is a rather tragic ending. In 2007, a large number of companies working with high technologies fell victim to a massive wave of malicious network attacks. Even though James denied any involvement in them, he was suspected of this and was charged with it at the trial. In 2008, James committed suicide (shot himself), believing that he would be convicted of crimes that he did not commit.

Computer Hacking and its Consequences

My Experience First of all, I really appreciate the idea of cloud storage because it enables us to access our files across various devices very easily. So, as part of this experimental activity, I first accessed google drive instantly since …

For this activity, you will become acquainted with the market for cloud e-mail. You will experience creating an e-mail account with three separate e-mail services and you will send an e-mail using each one. Product Strategy I already have my …

For this activity, you will become acquainted with the market for free word processing software. As you know, your assignment must be submitted in Microsoft Word format. However, there are other word processing tools, many of which are free to …