The attempts of some post-Impressionist artists to create a modern sacred art as an alternative to traditional Biblical art took various directions in the 1880s and 90s. Spiritual beliefs and the common goal to reinvent the sacred for the modern age can be found in the works of Van Gogh, Gauguin, Maurice Denis, and Émile Bernard. Select two to three paintings, panel decorations, ceramics, or furniture pieces, and write a comparative essay discussing issues of form and content. How are these works similar? How do they diverge? Do you think the artists are successful at creating a modern sacred art?

The love and compassion of humans sought multiple ways of expression regarding religious views, beliefs, personalities, values, and events. One such expression is paintings where the painter depicts and portrays his ideas and feelings on multiple objects with the help of various materials. In past times such artistic depiction was based on Torah and Bible, which was called traditional Biblical art. Such art was solely a depiction of various mythologies, historical events, and multiple persons and places narrated and enlisted in both these scriptures. With the passage of time, sacred art took the place of this Biblical art and depicted various heavenly and non-heavenly religions. This transformation is used to uplift the human mind towards spiritual intentions. The sacred art leads towards practical and operative aspects of spirituality and mystic rituals within the paradigm of religious traditions. The art depiction regarding sacred art includes multiple religions like Islam, Buddhism, Hinduism, Jainism and Confucian religion, etc.

The comparison of painting in this context comprises of both similarities and divergent points between them. The selected paintings for this purpose belong to two renowned personalities in the field of painting around the globe.

The first painting is “The Catholic Mystery, i888-90,” belongs to Maurice Denis, a French artist. This painting is one of his masterpieces and gives multiple dimensions to the theme of the work. The said work is an artistic depiction of a theme made by oil on the canvas by Denis. 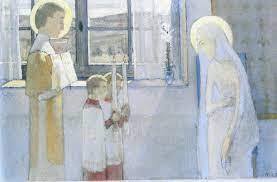 While at the same time, the second painting is “The Sacred Grove, 1884/89,” which the marvelous work of Pierre Puvis de Chavannes, who was a French artist. This piece of work also has a structural similarity with the previous one as it is also made of oil on the canvas. The exploration of the idea and the thematic perspective is much broadened in this painting.

Similarities & Divergences between the Paintings:

The judgment of paintings regarding the similarities and contrasts is quite challenging work to do, especially when one is finding these specialties between the works of two giants of the world of paintings. However, the similarities and differences between paintings can be interpreted and inferred by the adoption of two approaches. These are termed as objective sets as well as emotional sets. For the said purpose, we intend to use multiple parameters, including these stated approaches. Using various tools and indicators, we will be able to find out the said similarities and divergences between these paintings.

Meanwhile, the first similarity between these paintings lies with the structural and material viewpoint. Both paintings are made with oil on canvas techniques. The simplicity and traditional material are used to depict the idea by both artists in this regard. Further, the style of both paintings is peace-oriented with a soothing color combination. The coloring scheme is appealing to the theme of the paintings. It looks like the artists have made color combinations in establishing justice with their objects to be portrayed. The other similarity is the natural view depiction of the objects. The peace and nature are soothing with respect to the coloring of the paintings.

Furthermore, both the paintings look unique in their description of the theme. Painting #1looks unique combination with portray of all human ages, i.e., youth, adult, and old age. All the times and eras of the human age are displayed with the white color of piousness and spiritual heights. The uniqueness of this painting serves the promotion of spirituality among all ages instead of old or mature age. The rightness and right path are for all ages. Similarly, in painting two, the uniqueness catches the attention of the viewer with a depiction of various aged humans with social integration. The personals depict spiritual heights while remaining very close to nature and natural objects. Both the paintings look like very original pieces of artwork that portray peace, nature, and a spiritual roadmap for humans. The theme of both the paintings is sacred art with the promotion of spirituality among humans.

As far as the professional quality of the paintings is concerned, both have the similarity of neatness and craft of art in a very expert level way. Meanwhile, the aesthetic quality of both the paintings is concerned; these are much similar in view. But they have differences regarding the complexity of the work. The painting by Denis depicts simple objects with various aged humans connected with the sacredness of spirituality. While on the other hand, the painting by Chavannes is much more complex due to the huge diversity of objects. The depiction of the natural object with humans and multiple directions of human activities with artificial and man-made construction make it complex art. The composition of the paintings also varies with each other in the level of magnitude and object orientation.

In the same way, if we view both paintings by the holistic and analytical process, they vary from each other in the selection and application of materials. Moreover, painting one is more concentric on the limited theme of the work and depiction, while painting two depicts large scale and multiple shades of themes. The objects in painting two are numerous with various directions. Last but not least, painting two depicts more freedom and expressions compared to painting one by Denis.

Hence, having deep considerations of the artistic work of both legends, we can say that both pieces of paintings are marvelous. As far as the success in the depiction of sacred art is concerned, undoubtedly both have left indelible imprints in this regard. Both the artists approached the high marked spirituality in these paintings. Having divergences between the two, the paintings portray the modern sacred art entitled to peace, harmony, care, love, and affection among various stakeholders. Both the artists successfully portrayed and represented sacred art on the canvas through their high-marked artistic approaches.

A Trip to the Museum

The human mind is curious to know about multiple objects and get information regarding numerous things. This unique feature urges humanity to meet the thirst for knowledge. This thirst usually gains water in classrooms, laboratories, intensive workshops, and various trips …

The Rite of Spring: Pictures from Pagan Russia in Two Parts

Acid Rain “The Rite of Spring: Pictures from Pagan Russia in Two Parts” is a ballet by Igor Stravinsky, who was a Russian composer. Vaslav Nijinsky and Nicholas Roerich were the choreographers and the stage and costume designers for this …