Apple, the company had been a pioneer in the market of personal computers. It sells a variety of software and related services which include networking solutions and applications. It offers a wide range of products and services which range from iPhone to Mac, Apple Tv etc along with a portfolio of other professional and consumer applications. The digital content of the company is also sold through various platforms. To sum, it attempts to offer the best user experience for its customers. Its competitive advantage lies in its unique ability to create its own systems. However, as it has to deal in a competitive environment, the company also faces various different hurdles in order to remain competitive. The SWOT analysis thus is done to analyze the probability of threats and opportunities and the weaknesses and strengths that a company might go through during its operations in the business

Firstly the strength of the company lies in the innovative products the company offers to its customers. The company in the past had presented many products which had been unique and had remained popular among the customers. It started with the Mac Book then iPod and the list goes on. Thus, Apple seems to aim to provide the customized solutions and to cover the individual desires through its products.

Secondly, Apple has remained been able to maintain its undisputed design excellence and the loyalty of its core user base. This has caused it to maintain a strong market share in the presence of other strong competitors as well. The company’s leadership position which it has remained successful to maintain and the brand equity in this competitive environment have been one of its unique strength. According to studies, in 2014 the company crossed 700 billion dollars in business. Further, having a number one brand its value is estimated to have 118.9 billion dollars.

Fourthly, one of the biggest advantages of the company’s success and its strength lies in its distribution channels. The data of the company shows that it has 470 of its own stores. Further, it also sells through various trade partners who help the company to expand its reach throughout the globe. In addition to its stylish design, the products of the company were also characterized by attractive displays, post-industrial feel, and clean lines. Product diversification had also been a major strength of the company, it was fueled by the company’s ability to maintain a strong customer focus.

Finally, the company invests heavily in the research and development initiatives to remain competitive and to remain ahead. It helps the company to build its brand and to design a competitive pricing strategy. Also, the customer focus in order to design their products is a major strength of the company.

The internal conflicts and the managerial issues had been one of the major causes of the company that it had seen tough times as well. Also, the delay in the adoption of Intel microprocessors, also caused the company to grow in frustration in order to align itself with the industry standards.

Moreover, the thin product line was a concern for apple to look upon.

Finally, the overdependence of apple sales on one product can also seem as its weakness. The data from the company suggests that the company relies heavily on the sales of iPhone and it has targeted the wealthy customers through this product. This fact may not only cause the company to face hurdles in exploiting the other opportunities available in the market and might give an edge to the competitors over the company. The figure below affirms the claim. 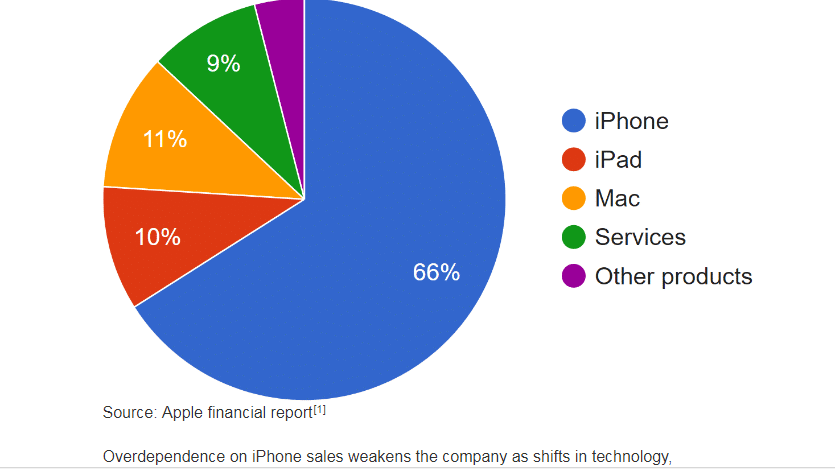 The delay in adopting the industry standards posed a threat to the old application users when the company adopted these standards. But the company offered various boot programs to facilitate its customers.

Further, the strategic move which the company made so as a result, it opened its first retail store, although this move had a strong potential and was an opportunity for the company it also contained the risks of backlash from the Apple’s long-standing retail partners as the industry trend in the past were the strong and long-term reliance on the third-party retailers.

Moreover, the company is surrounded by the handful of competitors who collectively constitute half of the market. They also constitute a huge range of small enterprises who produce products that are either branded or unbranded and often attract the customers throughout the globe by using discounts.

Finally, for the company, market penetration is a compelling threat considering the circumstances in which the companies are operating and the internal situations the company has gone through and may encounter. For instance, Android is taking the market share of the company. Also, the laptop competition is burgeoning as well. These facts must be taken into consideration by the company well before time.

The strategic shifts of the company such as opening its first retail store have proved to be an opportunity and a new avenue of expanding its business successfully.

Where on one hand the offering of new products was the strength of the company, the experiment of launching different products of other categories, such as iPod, iPhone etc.

Determine the probability of each number of planes sold-of 0, 1, 2, 3-in a 50-week period. (Pioneer sales office is closed the other two weeks of the year.)