The selected article “The Growing Gap between Landline and Dual Frame Election Polls” (Keeter, Christian and Michael Dimock) is about the survey conducted by Pew Research. This survey was conducted in 2010 to determine the gap between the polls conducted among the users of “Landline, Cell Phones, and Dual Frame.” With the help of this survey, Pew Research Centre” is enabled to state that which party is progressing among the people of America. Also, what is the margin of success of political parties? The lead of “Republicans and Democratic” is clear from this article as we can easily find that which party is famous among the “Landline Respondents, Cell Phone Respondents and Both Respondents.”

This article discusses gap be the tween growing using the statistics that are provided by “Pew Research Centre.” There are some Americans who prefer cell phone and this trend is growing very faster, so it was necessary to conduct a survey considering both users to find that what is the opinion of respondents of these devices about the elections. This article has stated the answers to this question using many statistical tables. The results also show that which president was more famous among the different response. The basic purpose of this survey was to determine the growing gap between “Landline and Dual frame users” which has answered many questions including the one that the likely voters are doubled than in 2008 polls.

How was Survey Conducted?

The survey was conducted by following 6 Pew Research Centres (Keeter, Christian and Michael Dimock). The survey includes interviews which were based on telephone, and these interviews were conducted among the adults of age 18 and older than 18. All of the adults belonged to the United States. This survey covers the dates and data fields having their respective statistics described in Table 1 and Table 2. The first one is for registered and later is for likely voters.

Table 1 Data Set for different Survey including the Number of Registered Voters on Different.

This survey has divided the population into two major categories which are “Registered” and “Likely” voters. The registered voters are those who only said that they are registered, but the likely voters confirmed that they would cast a vote on election day. The term likely refers to the people who commit that they will cast a vote on election day (Likely voter). The above-stated survey was successfully conducted under the supervision of following institutes;

The interviews were arranged on the telephone only in the English language for “Mid-Oct” and “Late Oct” Surveys. But Spanish was also used with English for conducting the interviews in other surveys. The cell and landline numbers were obtained from “Survey Sampling International” which provides research data solutions in the global market (Data Solutions and Technology for Market Researchers). The weight of population is given in Table 3, and this data is based refers to “2009 National Health Interview Survey” (2009 National Health Interview Survey). 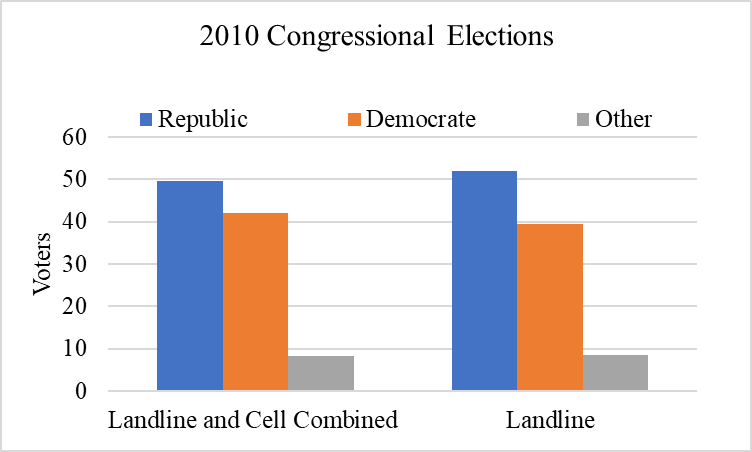 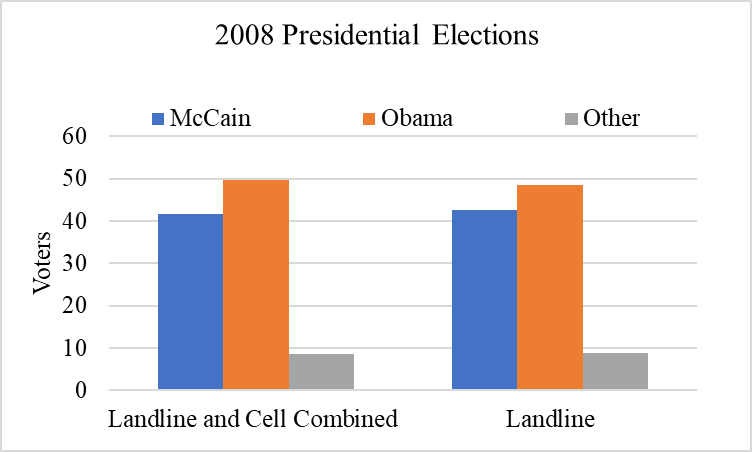 First of all, this survey provides a general result in which we can determine the popularity of either party in congressional elections and either president in the presidential election as shown in Figure 1

Table 5 Congressional Polls Votes through Landline Only, Cell Only, Dual Landline and Cell

Another result shows that all the age group people have chosen “Republic” over “Democratic.”

Determination of Margin of Error

The margin of error present in the data was necessary to determine because the groups of respondents were overlapping. The combined sample of “Landline and Cell” was overlapping with the “Landline Only” sample, so it was necessary to conduct the significance tests. These significance tests are conducted using a computer software by taking into account the weight effect of the sample. For registered and likely voters, the expected marginal error is calculated by keeping the confidence interval 95% for both samples including “Landline plus Cell” and “Landline Only.” The results are displayed in

What Is a Blog? Complete Types, and Benefits Guide