The field of analog electronics has been in existence for a long time. It forms the fundamental platform for the synthesis of signals in various systems. Resistors, capacitors, and inductors form the elements of a circuit. The characteristics of these components can be studied in a laboratory from the knowledge derived from the first principles. As a researcher in the field, my interest would be to understand the frequency response of the various combinations of the elements, in this case, the resistor-capacitor integral. The main objective of this study is to experimentally measure the frequency response of a simple RC circuit using LabVIEW and observe how changing R and C will affect the result.

This lab will involve the study of RC circuits at a basic level. Equations that explain the charging and discharging of capacitors are analyzed. The frequency response of a capacitor is explored using experimental data, and a bode plot, and then compared to the theoretical values as given in MATLAB. The effect of variations in the resistance of the RC circuit

A capacitor is a passive electronic component consisting of two or more conductors separated by an insulator usually a dielectric. The device is used to store electric charges. Normally, its conductors come in form of two metal plates that are equally charged but with opposite polarity. However, some capacitors have more than two metal plates and are popularly called multi-plate capacitors (Aparicio & Hajimiri, 2002). A force of attraction exists between the charged metal plates of a capacitor. According to Coulomb’s law, the force is inversely proportional to the square of the separation distance of the plates as expressed by the equation (2).

The charge held by a capacitor is not constant and varies with time. Mathematically, a capacitor’s charge can be described using the following equation []:

The purpose of this lab is to measure the output of a basic resistor-capacitor circuit. The simple RC circuit is as shown in figure

MATLAB can be used to build and acquire the response using precise approximation commands. Both the capacitor and the resistor are connected in series relative to the ground. The output voltage, Vout is taken across the capacitor, C1. The voltage divider rule comes in handy where resistance, R will be used for the passive component, the resistor, while capacitive reactance will be used for the capacitor. Substituting the values in figure 1 into the above equation gives the transfer function of the circuit as follows: Multiplying both sides by, num = [1000];% numerator of transfer function this is a simple function and a small MATLAB code can solve it. The following code is used to find its frequency response using the Bode plot:

From the code, it is realized that the polynomial s + 1000 is modeled as [1 1000]. Upon running the code, the following will appear in the command window and figure 2 is the resultant Bode plot.

Pieces of equipment required for the lab include a function generator which will be the main signal source and an oscilloscope to display various output waveforms. 15v DC power source is required to bias the RC circuit. The test material, is, a 10 k resistor, 100 k resistor, and a 0.1 F capacitor. One NI Elvis II board and three BNC-to-alligator connectors are the necessary hardware chosen so as to work optimally with LabVIEW graphical software; all are propriety materials made by National Instruments (Ni Elvis II, 2018). The connector joins CH0 of the scope’s input to the output of the test circuit. MATLAB environment is useful in this lab as it acts as the theoretical reference point; various waveforms are ideally for comparison with the practical ones displayed in LabVIEW. A personal computer is required to run both software.

The most important configuration in LabVIEW was the DAQ; it involved specifying all the inputs and output channels, as well as the data acquired through each. Other necessary configurations included the start frequency, stop frequency, sweep time, amplitude, and voltage offset for the signal generator. Also, the dynamic signal analyzer virtual instrument (VI) file was opened with LabVIEW.

The RC circuit described in the theory section was built and the frequency response was measured. The frequency generator was set to the specifications given in table 1.

Table 1: Set up values for the frequency generator

The 10 k resistor was replaced with a 100 k resistor and the Bode plot was measured again. The circuit reflected the schematic in figure 3. 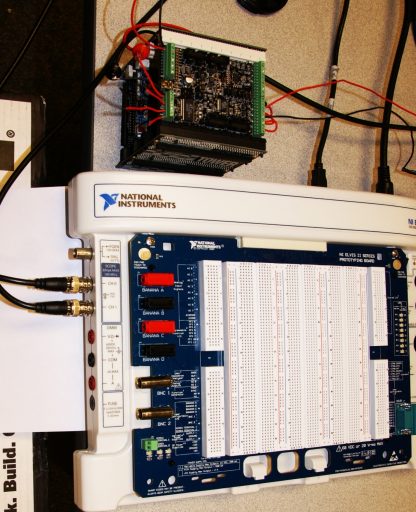 Input from frequency generator to filter 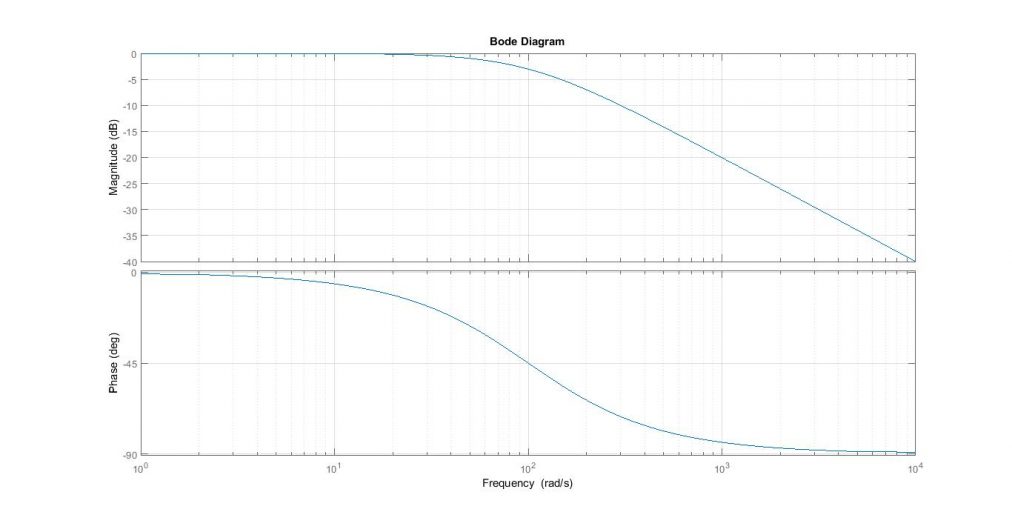 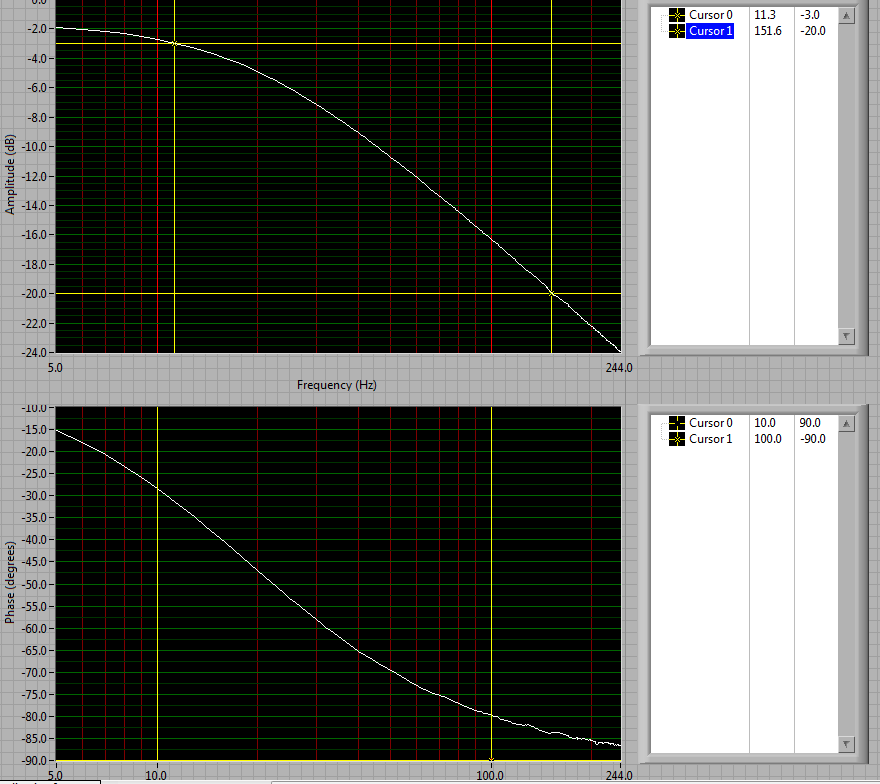 Figure (5) shows the resultant plot for the code used in MATLAB.

The theoretical curve from MATLAB and the Bode plot from actual measurement was in deed matching in both magnitude and phase for the various cases. The Bode plot shows the frequency response of both to be nearly flat in the lower frequencies; the result is that the output was almost the same as the input, that is, a gain close to unity is achieved until reaching the corner frequency; the latter being -3 dB or Vout = 0.707 Vin (Lascu, L., Boldea, & Blaabjerg, 2009). For higher frequencies, it gradually reduces for both magnitude and phase. The magnitude reduces at a rate of 20dB/decade while the phase eventually becomes -900. The explanation for this is that a capacitor has high capacitive reactance for lower frequencies and hence blocks the flow of current. On the other hand, for medium-high frequencies, the capacitor starts to conduct, with it acting as a typical short circuit for higher frequencies (Passive Low Pass Filter, 2016). Hence, the output voltage will be zero.

The effect of reducing the resistor in the RC circuit from 100 k to 10 k is that it raises the cut-off frequency from 16 HZ to 160 Hz as shown by the equation below:

The effect of increasing the value of the capacitor from 0.1 μF to 1 μF while keeping the resistance at 100 k is that it reduces the cut-off frequency, from 16 Hz to 1.6 Hz as shown below:

The equation above shows that the capacitor is more sensitive hence a slight change in its value has a substantial effect on the circuit parameters. The implication of this is that, by carefully choosing the desirable resistor and capacitor duo, an RC circuit that selectively allows or blocks a certain range of frequencies can be achieved (Miller, Outlaw, & Holloway, 2010). For this lab, the RC combination was operating as a first-order low pass filter. Low pass filters only allow lower frequencies to pass while blocking higher frequencies. Other common filters used in analog electronics are the high pass filter, band pass filter, and band stop filter (Sun, 2002).

Various possible sources of errors include contact losses, resistances in cable resulting in some losses, possibilities of trade-offs during plotting of Bode plot, and theoretical curves.

The lab session was a success and the objective was fully met. The frequency response of RC circuits was explored. RC circuits can be used to make analog filters. The test RC circuits used in the experiment were low pass filters. A low pass filter selectively allows lower frequencies of an input signal to pass, while blocking higher frequencies. The bandwidth of the filter is measured from zero to the cut-off frequency. The cut-off frequency is also known as the corner frequency and is usually at -3 dB of the input voltages

My Experience First of all, I really appreciate the idea of cloud storage because it enables us to access our files across various devices very easily. So, as part of this experimental activity, I first accessed google drive instantly since …

For this activity, you will become acquainted with the market for cloud e-mail. You will experience creating an e-mail account with three separate e-mail services and you will send an e-mail using each one. Product Strategy I already have my …

For this activity, you will become acquainted with the market for free word processing software. As you know, your assignment must be submitted in Microsoft Word format. However, there are other word processing tools, many of which are free to …