Francisco Goya has been known as one of the greatest painters of Spanish and international paintings. Total number of art works by Francisco Goya is 389 consists of different geners like Mythological, religious, Historical, The disaster of war. The period fro 1794 to 1815 is the French invasion period. The arts of Francisco depicts the what was happened during the war. In this era most of the Northern Europe was under the Frecch rule. Frnech invasion began with the occupation of northern Europe in 1794. 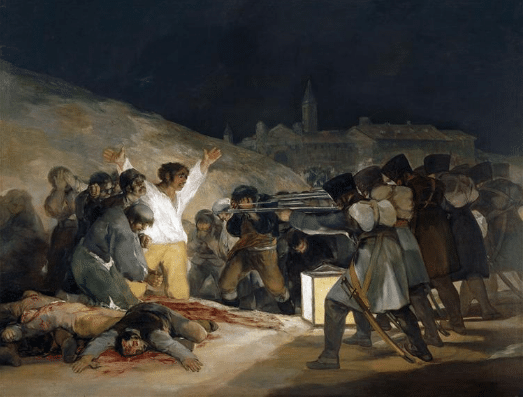 Execution of the defenders of Madrid (1808) was one of the amazing masterpeice made by Francisco Goya. The painting was commissioned by the provisional government of spain. Goya made a request to provisional government to be allowed for making a painting that will commemorate the invasion by Napoleon’s troops in 1808. The time at which this paintainig painted was considered revolutionary and groundbreaking. Painting represents the the horrifying scene of war that had been never openly illustrated. Scene takes place at night and has been illuminated by lantern. The painting focused on one man that is showsn as the main among others in the light of a lantern. Arms of a man are up and facing the French troop holding rifles in front of him. All other companions were on the ground. Stuyle that is use in this painting is romanticism. In the painting the body of others lies on the ground and the hands raised up by the man crucifies as Christ and about to be executed. Goya makes us sympathize with the peasents by focusing on their anguish as tehyawait their fate. The firing squad on the other hand is faceless as they caryy out their brutal attack.

Warfare is generally undertaken for poltical reasons. The French revolution wars were exceptional in term of poltical conisderations. The Napoleonic war were characterized by the extent to which they extended and retainded social and political innovations of revolutionary france. The political situations of france impelled newly established government to make wars with the neighbouring states. The leaders of French revolution expanded the foreign policy of freench foreign policy. In the period of 1793 to 1799, there was no certainty by any means that france would have wait for Europe to be pacified before defeating British. During the firest few years, French did have some advantage over bbritish naval supremacy. By 1796, 60,000 trops were fallen in the battles with british.

Subject of the painting depicts the war sceneario during invasion. How French troops brutally assaulted. Picture revals the troops having rifles in their hands and were firing the people who does not have any weapon in their hands. The riot of the people of Madrid against the army of napoleon was savegly punished by the execution and arrest that wa continued from 2nd may till to the next day. The scene Goya saw from his window and went directly to that particular spot and captured the moment into his painting in the light of a lantern. Gesture and postures of the soldiers facing the people, having rifles in their hands pointed towards the people shows the horrifying nature of the scene. The execution of innocent people given French troops a sense of happiness like they have achieved big shows the barbarism and cruelty of the troops.

There is a symbolism in the painting. As it depicts the inner subjectivity of Fancisco. Painting shows the synthesis of feelings and forms of a painter. How he used his feelings in his painting. What fellings he had while painting this masterpiece at the point where this all scene had happened. Franciso believed that the art should reflect an idea or emotion that represents the natural world in objective manner embroided by realism.

Goya got success when he was appointed as court painter, where he started painting on different themes other then religious theme. Although the paintings he made during French invasion and in disaster of wars depicts what he has seen at that time but he was never convinced himself from his paintings. He always wanted to paint that has more religious thmes than others. In the ending time of his life, he was not able to cope with the things he had seen during war so he staretd painting again on religious themes to give himself some sort of relief. The prints of his last work do not depicts that he turned his back on the religion rather, he had focused his mind on how far the time has shaped the need for reform.

Injustices in the contemporary society

Perception About Stimulant Use-A study on Academic and Sports Performance

Jim Crow Segregation Laws at the End of the 19th Century

“Right to Vote” is recognized as the key right of any citizen in any democratic country. People can easily be abused without this right. This was exactly happening to African American people who were living in the South after Civil …

The American war was fought between the North (The Union) and the South (The confederacy) Americans from 1861 to 1865. The Civil War was basically initiated due to the long-standing controversy of black people slavery. It destroyed the infrastructure of …

Introduction California has been populated for thousands of years. There were diversified tribes of Native American living there when European arrived. These tribes together with Maidu, Pomo, Mohave, Chumash, and Yuma spoke plenty of languages but separated by geographical characteristics …