N. Gregory Mankiw is a well-known and popular macro economist known for his contributions and excellent academic career throughout. He is an American macroeconomist and was born on February 3, 1958, in Trenton, New Jersey. He is the Robert M. Beren Professor of Economics at Harvard University. Although Makwin has worked a lot in the field of economics, the things that made him a standout in the academics are his work in New Keynesian economics. According to the research paper in Economics (RePEc), an analysis was carried based on all the economics based citations and publications. It was found out that N. Gregory Mankiw holds the twenty-third place in the most influential economist out of a huge number of people nearly equal to fifty thousand. (Business Week) Individuals who have commented on this always make a say that the broadness and his broad way of writing for economics and economic policy are the main reason behind this whole influence.

Talking about the academic background of Mankiw, he completed his graduation from Princeton University summa cum laude with Bachelor of Arts in economics in the year 1980. At that time he was with other economists like David Romer of the moment which further became co-authors with him in his writings. After being done with college, he worked on his Doctor of philosophy in two different instituted simultaneously. Other than this his work as an economist in the work force council of economic advisor is still recognized as one of the best ones. The eager to learn more did not let him stop, and he completed his Ph.D. in economics in the year 1984. He taught at MIT and Harvard both but later he started to work as an assistant professor at Harvard which is counted as one of his remarkable works. At a young age of twenty-nine, he was promoted to the position of a full professor making him well-known for his hard work. (Business Week)

Mankiw’s achievements are a composed of a long list of well-known academic writings and research methods. His monthly column in the ‘The New York Times’ since 2007 in the business section is found to be the most read column of all times due to his way of expressing the whole idea with minimal words. Many economists claim that his researchers are brief and so understandable that he is marked as the ninth most productive research economist. Many best-selling textbooks in economics are written by Mankiw. In 2011, a survey of economics was carried by the Business week to find out about the favorite economists falling under the age of sixty. N. Gregory Mankiw was found to be the second favorite one. His work has remained so influential that he has given his services as an economic advisor to several Republican politicians. Under the presidency of George W. Bush, Mankiw remained the president of the council of economic advisors from the year 2003 to 2006. After 2006 he continued working an economic adviser but this time he worked with Mitt Romney. During the presidential campaign in 2008, his work was admirable.

Mankiw has developed a lot of economic theories along with extending or renewing the old ones by making extensible research on them. He reworked on the old theories of menu cost and aggregate demand externalities. New Keynesian Phillips curve was a widely used method in economics having room for improvement. In 2002 after extensive research on this Mankiw proposed an alternative to this. He gave the 3-Equation New Keynesian Model as an alternative to this curve which was based on three basic points about the disinflations, monetary policy, and change in inflation.(Business Week) Below attached (Figure 1) is a graphical representation of this theory proposed by the Makwin and Ricardo Reis, 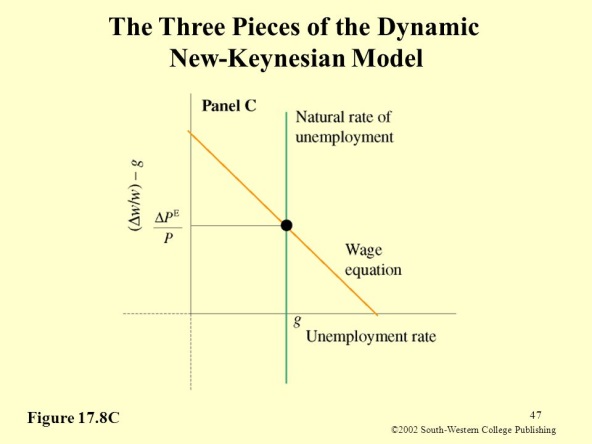 Gregory Makwin has made a lot of contributions in the field of macroeconomics. His researches and his articles whether individual articles or coauthored have made it easy to understand so many topics. Other than this he has proposed many other informative articles on the topics of empirical analysis. Besides giving the alternate opinion for Philips curve one of his paper was widely cited. The paper was named as “A Contribution to the Empirics of Economic Growth” which was written along with another economist David Romer. This paper revolves around the topic of ‘Solo growth model.’ In this paper both the writers agree upon the fact that human capital helps in explaining so much about the differences in lives of the people concerning the living standards. After its publications, this paper was the talk of the town and read by every single economist. The authenticity of this paper can be observed by the fact that this paper has been cited in the field of economics more than fifteen thousand times. Citations are always made when the other person believes the paper to be of great importance and authentic. This very paper of Makwin with his coauthor proved to be a great hit among the macro economists especially. (New York Times, Andrew Rankin)

Besides his papers and articles, Gregory Makwin wrote many books. His two books are widely used as college level textbooks. The two books are the intermediate-level Macroeconomics and the more famous introductory text Principles of Economics. These books are written, so precisely those various publications offered him to publish the book with great incentives. His writings are so well written that according to New York Times Gregory Makwin was once offered $1.4 million advances to write a book on the basics of Macroeconomics. (New York Times, Andrew Rankin) Since the time he wrote his books millions of copies had been sold making him the best seller in the field of economics especially macroeconomics.

Not only his academic achievements but his other career activities made him famous as a macroeconomist. His work during the presidency of George Bush has always been remarkable. His campaigns and 2004’s economic report based on brutal facts and truthful statements made him a great hit.

How to Give an Effective Online Presentation From Home

Since the Covid 19 pandemic, humans have undergone massive changes in their respective life and work ethics. The way of carrying out tasks has been modified to best suit the need of the hour, ensuring proper health and life functions …