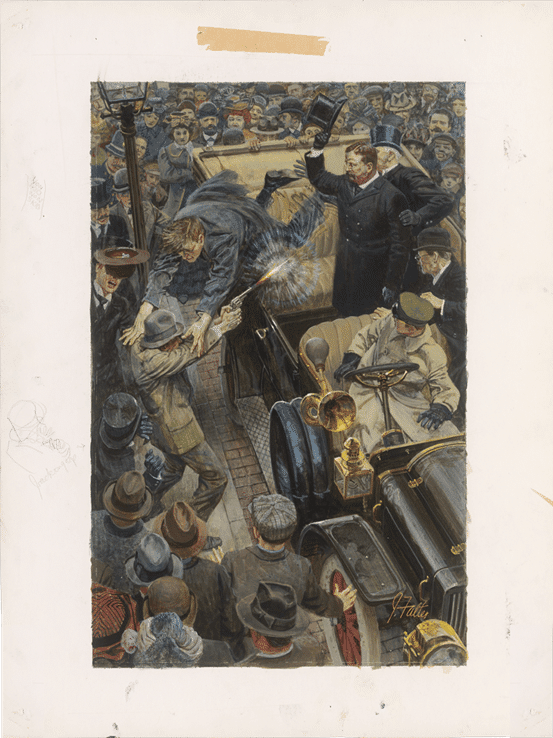 In John Falter’s famous art piece, he captures a detailed scenario of an attempted-yet-failed assassination attempt on the life of Theodore Roosevelt. The picture itself is worth a thousand words, as a mere look at it defines every aspect of it in a clear perspective. The assassination attempt has been one of the biggest events from which Roosevelt walked away boldly and left a true remark in history as to how strong a leader must be in a crisis. His words alone convey a strong message, “I don’t know whether you understand that I have been shot; but it takes more than that to kill a Bull Moose.” Historians have recorded that he stood, in his blood soaked shirt and spoke to people for at least fifty five minutes, whereas some have claimed it to be ninety minutes.

The picture represents the scenario of Theodore Roosevelt, on his campaign trip to Milwaukee, for another term for presidential elections. Theodore Roosevelt (standing on the right) can be clearly seen, addressing the people and delivering his speech. On this day though, after being tired from delivering fifteen to twenty speeches a day, he made a quick stop but he and his security detail were unaware of what awaited them that day. John Schrank with his .38 caliber revolver (person on the left) took his chance to shoot the colonel at a point blank range. He was interrupted by a bystander (person right seen leaning down, right above the shooter), who leapt in just in time to tackle Schrank down. The bullet missed Roosevelt’s head but hit him in the chest. Although, he was saved by the metal frame glasses in his breast pocket and his speech, he had been carrying.

The picture painted by John Falter, sets a clear depiction of the events carried out during Roosevelt’s speech in Milwaukee. Roosevelt survived the attempted murder on his life but by looking at the picture, one can clearly look into how Schrank planned out to assassinate the colonel, at a point blank range, after trailing them since they left New Orleans.

The Economy of Texas