Global production networks focus on the production of services, goods and commodities within the geographically differentiated, macro-structural framework through complex webs of production circuits and networks. By being global, these networks do not necessarily mean that they span the entire world rather the term signifies that they are highly geographically extensive and functionally integrated across national boundaries. These networks are not only confined to the physical commodities, but also non-physical products also come within the ambit of global production networks.

How do they operate to subordinate nations?

As the core of the GPN is the circuit of transactions, connections and functions that are interconnected through which a particular service, good and commodity is distributed, produced and consumed. There are certain particular inputs upon which every element of the production circuit is dependant. These include technology, services, logistics, energy, and finance. The whole circle is required to be regulated, coordinated and controlled. These elements may be disaggregated in both ways wither geographically and organizationally.

Thus, these globalized production networks tend to subordinate nations to acquire economies of scale. The countries from where the inputs are available are cheaper costs and the countries which can be helpful to transform the products, and also the one’s that has a huge customer base so that the final products may be shipped to that countries for the consumption purposes and as a result, hefty profits may be earned.

Role of Financialization in the process:

Financialization is the increased role of financial actors, financial motives, financial markets and the financial institutions in the operation of international and domestic economies.

Financial system plays a pivotal role -out of all the advanced business services-in the GPNs. It is because at all stages of distribution and production every economic activity is needed to be financed. Thus the decisions of the financiers contain extra-ordinarily powerful influence. These decisions not only lubricate the production circuits but they also help them to shape their evaluative decisions. These evaluative decisions tell these financiers that where they should invest to gain the highest returns.

The figure tells that how the TNCs, labor, consumers, states and civil society organizations cause to shape the geographical configuration of the changing global economy by participating in different production networks and circuits.

Civil Society movements at the global level are the networks that collaborate globally to advance similar agendas through out the world. This gives strength to them, and they became powerful in the global governance. 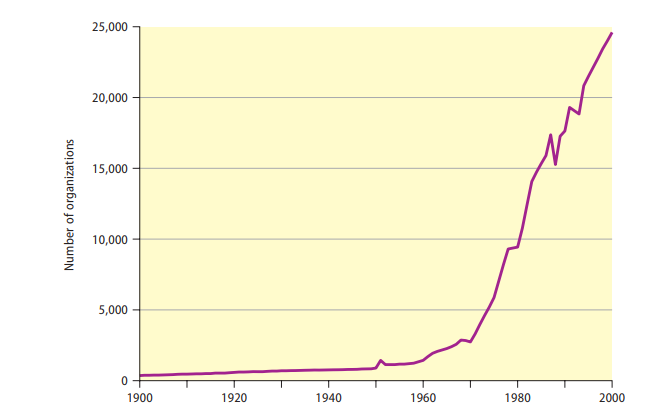 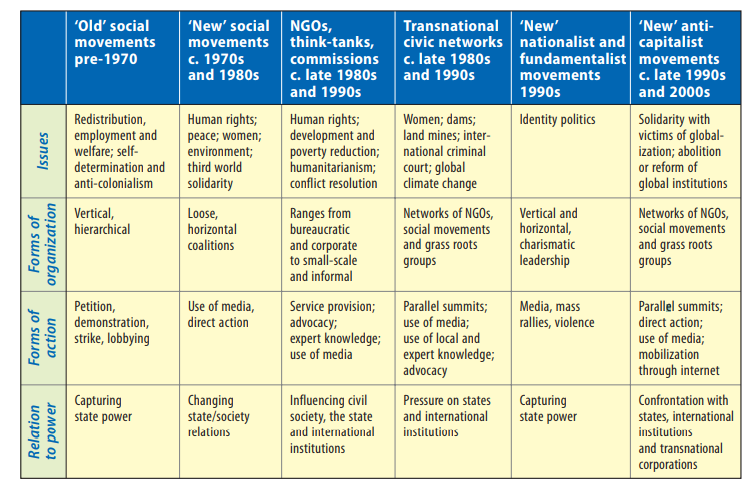 The countries which are newly industrialized include those countries that have made progress in order to become industrialized and grown with strong pac over the past 40 years. They include South Korea, Taiwan, Singapore and Hong Kong. These countries have seen increased levels of growth in the four decades after 1960. The per capita income of these countries is also close to 50 percent as compared to the developed nations. The ration between the richest and the poorest countries was 3:1 in 1820 and 2007 this ration has grown to a 92:1.

Figure: The widening income gap between the countries 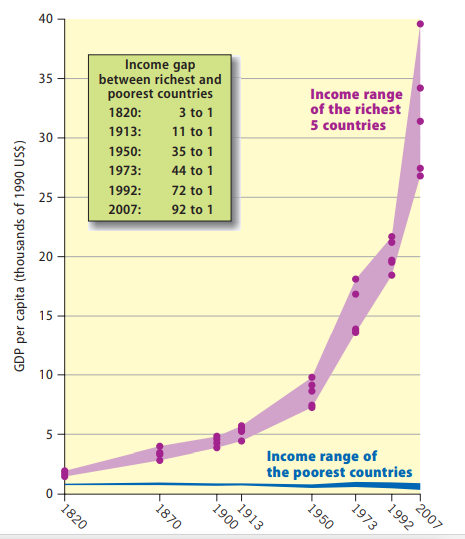 In 2010, approximately 1.2 billion people lived below the international poverty line (less than $1.25 per day). This was some 700 million fewer than in 1990: a real improvement, but one that was highly uneven geographically

In East Asia, the countries, the percentage of poorest people was 49 percent in the year 1990, and it was reduced to 21 percent in 2010. China has outperformed in this region. The country has been able to progress by reducing the poverty. The countries in east Asia-particularly four East Asian tigers are industrialized at a phenomenal rate.

The difference between the figures shows the specific social policies and the historical experiences. For instance the different patterns of land ownership and reform. The countries which progressed in the newly industrialized states, for instance, include Korea and Taiwan. These countries progressed as the post-war reform of land ownership caused a massive effect and increased the incomes of the individual by increasing the productivity in agriculture and by extending the domestic demand which ultimately contributed to the political stability. The countries which have been able to overcome the inequalities and poverty are those who fall in the transnational capitalist class, that involves those members who predominantly belong to developed countries. The TCC possess different characteristics which separated them from the slow progressive countries and cause them to attain modernity. These characteristics include the following:

These countries linked their economic interests globally rather than only restricting them in the local area. They aligned themselves with the global practices and rhetoric that emphasized consumerist and competitiveness. The pursued the outward orientation rather than being inward and local perspectives and issues. They changed the lifestyles and the patterns of consumption, education businesses. These countries projected them as citizens of the world as well the citizen where their birth took place.

Regional integration plays a very important role in the political and economic development. In the contemporary world, the technological advancements and the globalization has made the world a global village. Due to this factor, the importance of regional integration has been increased. The economies in the regions can collaborate and utilize the economies of scale.

The role of imperialism in the global system can be witnessed from the industrial revolution which manifested itself in the colonial subjection of Africa and Asia. With the slogan “to open the markets” the seizure of natural resources of the globe were the real motives. This trend is still reflected in the contemporary world today. The western imperialism can contribute to the economic stagnation in a way as happened in the early 19th century in Latin America when the decline in the silver and gold production caused a set of chain effect and reactions which ultimately resulted in an economic recession. The economy was disturbed badly which was later recovered by identifying a new market to explore as in the recovery phase the countries facing such issues focused on the renewal of silk industries and the tea industry. The skills workers play a very important role in the economic and political development of a country. These workers utilize their skills for the industries in which they are working thus ultimately add to the GDP (Gross Domestic Product) of the country. The countries in the south can overcome the imperialistic domination by revitalizing the economic policies and working on the skill and development and education of the workforce. These countries which are being victimized by the imperialistic interventions bear them because they are struggling in their economic development. Thus by improving their financialization and the right economic policies and the political stability, such imperialistic domination can be overcome.

Introduction According to the Hegemonic Stability Theory, a sovereign Hegemonic state is essential to form and uphold an international economic and monetary system. The main concern of HST is international trade policies. The single powerful state or the hegemon creates …

Factors Contributing to The Financial Crisis Of 2008 The financial crisis of 2008 resulted from a financial bubble which was originated from the breakdown of the “securitization food chain”. It was the conventional practice of borrowers who used to secure …

What economic factors are likely to influence your future customers?

LEGO has always embraced innovation and is strongly connected with its customers to provide them with a personalized experience of playing with LEGO toys. However, the recent trends of the customers towards technology-based group can be the next milestone for …