Art work that I admire 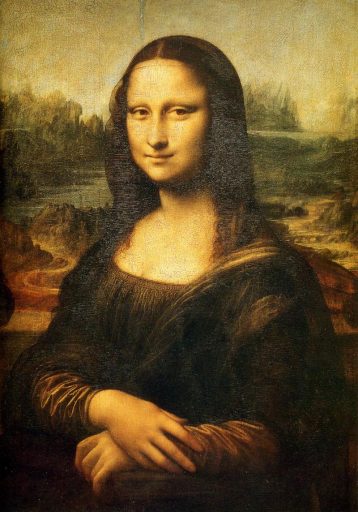 Location: The Louvre museum (France since 1797)

The paintings combined skill and brought out some realism through the oil used and one can marvel at the work being made at this time, as they captured much. These paintings in one or the other inculcated the use of landscapes. These landscapes were used to depict what was going on at that time. Like in this Monalisa was drawn and bared close resemblance with the Virgin Mary and sometimes in history it was called the Madonna. The Lady here represents real womanhood and calm posture, and her eyes fixed on someone in that barren land. The folding of hands is associated with masculinity but her doing so shows how confident she is on her escapades. This painting has every detail that one could like and it has survived for more than 500 years and up to now it has not lost its originality and one can accurately spot the difference from a fake one. This is because when you use direct vision the smile on her face is not there and the next you look the other way the smile come up.

Hence with its realistic nature its one of the best painting that I love from Da Vinci’s collection not even that one of the foetus can convince me.

The information about the Monalisa can be at the website of the The Louvre museum and www.visual-arts-cork.com

This is a classical representation of the 19th century painting as it includes Romanticism and not a historical painting as those from the realism era.

The paintings of the 19th century started leaning more towards drama and poetical interpretations. These paintings mostly depicted love and telling stories through them. The 19th century paintings also had this familiar use of models/beings rather than just coming up with an idea from limbo. In this era painter never concentrated on historical drawing but also had clients who requested for the paintings to keep as souvenirs. This can be seen where workers are regarded as heroes by one Honore Daumier, this was one way to create interest amongst people. Emotions were the core guide in creation of the oil paintings which could be adorned by extra engravings as desired by the artist in that time; they wanted to touch and connect well and still be relevant with their works in these era.

Even though with its adorable gold leaf engravings, the painting does not clearly communicate what it’s supposed to. In the painting the man’s face is bent towards giving the lady a cheek kiss while her hand is round his neck and the other on his robe with her eyes closed. The lady communicates unwillingness and anxiety instead of passion and love while wrapped in the same garment to experience their moments. Hence with the unclear details on the image by Klimt disapproves its goodness as the lady is disinterested in the act which is not good in a relationship.

The image can be more pleasing if the ladies gesture/details are corrected and her passion expressed well.

More information on the painting was taken from “thesquirrelreview.com”