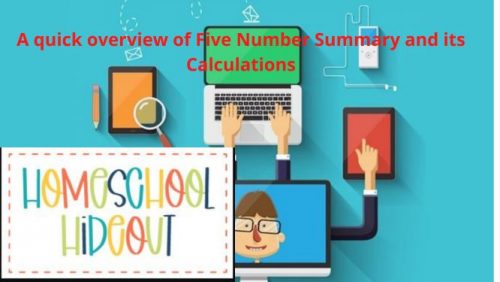 We will show you how to utilize a five-number summary to summarize the distribution of a data sample without assuming a complex data distribution in this post. This statistics summary can be used for any form of data analysis.

After reading this post, you will be able to use data summarization techniques such as estimating the mean and standard deviation, which are exclusively applicable to the Gaussian distribution. In addition, you will be able to identify a data sample using a five-number summary.

A non-parametric data summation method is the five-number summary. It’s also known as the five number summary because it comprises five statistical phrases that we’ll go over later.

It is generally referred to as the Tukey 5 number summary because it was proposed by John Tukey. It can be applied to any type of data to characterize the distribution of test samples.

The median is a statistical figure that indicates the data set’s most middle value. In other words, the median separates the bottom half of a data set from the upper half.

A maximum number is the number in the data set with the highest value. It is the most significant number in a given set of data.

A minimum number is the number in the data set with the lowest value. It’s the smallest number in a given set of numbers.

When should you use Five Number Summary?

The most general example of data summarization is the calculation of the mean and standard deviation for data having a Gaussian distribution. Using only these two characteristics, you can comprehend and replicate the data distribution. The data summary may include as little as tens of individual findings or as many as billions.

The problem is that measuring the mean and standard deviation of data that does not have a Gaussian distribution is challenging. These quantities are mathematically calculable, however they do not summarize the data distribution. In truth, they can be extremely deceptive.

Try out five number summary calculator to find all of the values associated with this term.

In the absence of a Gaussian distribution, the five-number summary should be employed to summarize the data set.

When we compare the procedure of computations to the entire collection of data we generally have with us, calculating a 5-number summary is simple. As previously explained, we must calculate five statistical terms in order to provide a five-number summary of our data.

Here, we’ll provide an example to show how the procedure works. For clarity, each term will be calculated separately. Before we get into the computations, here’s a hint for finding a five-number summary.

Make use of the following data set.

12 is the maximum number.

1 is the minimum number in this data set.

A quartile is an observable number at a certain moment that aids in the division of an ordered data sample into four equal-sized bits. The median, or second quartile, divides the ordered data set in half, whereas the first and third quartiles divide each half in thirds.

A percentile is an observed value at a certain point that aids in the segmentation of a structured data sample into 100 equal-sized portions. Quartiles are frequently expressed as percentages.

The quartile and percentile values are also rank statistics that may be calculated on any data set. They are used to quickly characterize how much data in the distribution is behind or ahead of a specific observed value.

Getting Rid Of Unnecessary Documents Shouldn't Be A Fuss: Here's Why

Statistics is a branch of mathematics that deals with the analysis done with the help of models, and representations of any provided data set or any real-life data. It deals with the methods and ways to collect, analyze, application of …

Statistics is one of the involved subjects in the academics. Statistics is the science and practice of developing human knowledge, it is the branch of mathematics dealing with the study of collection, analysis, interpretation, presentation, and organization of data in …

The curiosity to learn more about the universe and the way it works has done wonders for the human race. The travelers and researchers over the time have been working to find the shortest paths between their starting points and …